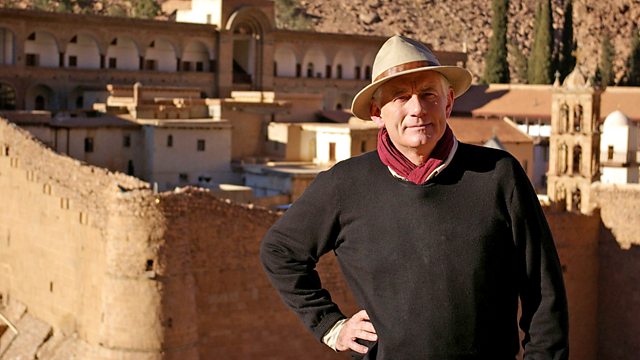 Dan Cruickshank’s Adventures in Architecture episode 3 – Paradise: Dan looks at buildings that evoke the image of heaven across religions and cultures, travelling to Egypt’s Sinai desert, China’s Hanging Temple, and Turkey’s Suleymaniye Mosque, a building that evokes the gates of paradise. Finally Dan loses himself in the boisterous holy town of Sri Ranganthaswamy, a place sacred to the Hindu religion.

In this series Cruickshank’s Adventures in Architecture: historian and writer Dan Cruickshank celebrates the creative force of architecture as he explores the world’s greatest cities, buildings and monuments.

The Hanging Temple, also Hengshan Hanging Temple, Hanging Monastery or Xuankong Temple is a temple built into a cliff (75 m or 246 ft above the ground) near Mount Heng in Hunyuan County, Datong City, Shanxi Province, China. The closest city is Datong, 64 kilometres (40 mi) to the northwest. Along with the Yungang Grottoes, the Hanging Temple is one of the main tourist attractions and historical sites in the Datong area. Built more than 1,500 years ago, this temple is notable not only for its location on a sheer precipice but also because it is the only existing temple with the combination of three Chinese traditional religions: Buddhism, Taoism, and Confucianism.

The structure is kept in place with oak crossbeams fitted into holes chiseled into the cliffs. The main supportive structure is hidden inside the bedrock. The monastery is located in the small canyon basin, and the body of the building hangs from the middle of the cliff under the prominent summit, protecting the temple from rain erosion and sunlight. Coupled with the repair of the dynasties, the color tattoo in the temple is relatively well preserved.

The Süleymaniye Mosque is an Ottoman imperial mosque located on the Third Hill of Istanbul, Turkey. The mosque was commissioned by Suleiman the Magnificent and designed by the imperial architect Mimar Sinan. An inscription specifies the foundation date as 1550 and the inauguration date as 1557.

Behind the qibla wall of the mosque is an enclosure containing the separate octagonal mausoleums of Suleiman the Magnificent and that of his wife Hurrem Sultan (Roxelana). For 462 years, the Süleymaniye Mosque was the largest mosque in the city, until it was surpassed by the Çamlıca Mosque in 2019. The Süleymaniye Mosque is one of the best-known sights of Istanbul, and from its location on the Third Hill, it commands a spectacular view of the city around the Golden Horn.

The Sri Ranganathaswamy Temple is a Hindu temple dedicated to Ranganatha, a form of the Supreme God, Maha Vishnu, located in Srirangam, Tiruchirapalli, Tamil Nadu, India. Constructed in the Dravidian architectural style, the temple is glorified by Alvars in their Divya Prabhanda and has the unique distinction of being not only the foremost among the 108 Divya Desams dedicated to Vishnu, but also the largest functioning Hindu temple in the world.

The Place Srirangpatna had the name of the Srirangapuri in the early ages later it got the name of the Srirangapatna. The town is an island being surrounded by the river Cauvery. In this town, there is the temple of Sri Ranganatha. Sri Lakshmi Narasimha, Sri Gangadereshwara, Sri Jyothirmaheshwara and other small temples. Among them, the main temple is that of Sri Ranganatha. The inner apartment of SriRanganatha temple was built in 817 CE by a lady by name Hambi, of the class of dancers in the year 894 CE.

It is one of the most illustrious Vaishnava temples in South India rich in legend and history. The temple has played an important role in Vaishnavism history starting with the 11th-century career of Ramanuja and his predecessors Nathamuni and Yamunacharya in Srirangam. Its location, on an island between the Kollidam and Kaveri rivers, has rendered it vulnerable to flooding as well as the rampaging of invading armies which repeatedly commandeered the site for military encampment. The temple was looted and destroyed by the Delhi Sultanate armies in a broad plunder raid on various cities of the Pandyan kingdom in early 14th century. The temple was rebuilt in late 14th century, the site fortified and expanded with many more gopurams in the 16th and 17th centuries. It was one of the hubs of early Bhakti movement with a devotional singing and dance tradition, but this tradition stopped during the 14th century and was revived in a limited way much later.