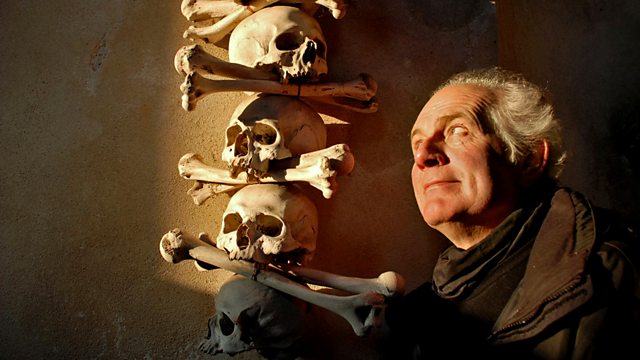 Dan Cruickshank’s Adventures in Architecture episode 2: Dan travels the globe to explore how different cultures have created architecture inspired by our mortality. In the Czech Republic, he reveals the macabre tale of a chapel decorated with human bones. Even more shocking is the Yaxha Mayan pyramids in Guatemala, sites of brutal human sacrifice.

Historian and writer Dan Cruickshank celebrates the creative force of architecture as he explores the world’s greatest cities, buildings and monuments.

Yaxha (or Yaxhá in Spanish orthography) is a Mesoamerican archaeological site in the northeast of the Petén Basin region, and a former ceremonial centre and city of the pre-Columbian Maya civilization. Yaxha was the third largest city in the region and experienced its maximum power during the Early Classic period (c. AD 250–600).

The city was located on a ridge overlooking Lake Yaxha. The name of the city derives from the Mayan for “blue-green water”; it is a notable survival of a Classic period place-name into the modern day. The Yaxha kingdom is estimated to have covered an area of 237 square kilometres (92 sq mi) and to have had a peak population of 42,000 in the Late Classic period of Mesoamerican chronology.

Yaxha had a long history of occupation with the first settlement being founded sometime in the Middle Preclassic period (c. 1000–350 BC). It developed into the largest city in the eastern Petén lakes region during the Late Preclassic (c. 350 BC – AD 250) and expanded into an enormous city during the Early Classic (c. AD 250–600). At this time, in common with other sites in Petén, it shows strong influence from the distant metropolis of Teotihuacan in the Valley of Mexico. It was eclipsed during the Late Classic (c. AD 600–900) by neighbouring Naranjo but was never completely dominated. The city survived well into the Terminal Classic (c. 800–900) but was abandoned by the Postclassic period (c. 900–1525).

The ruins of the city were first reported by Teoberto Maler who visited them in 1904. The site was mapped in the 1930s and again in the 1970s and stabilisation work began in the late 1980s. The ruins include the remains of more than 500 structures with a number of major archaeological groups linked by causeways. Approximately 40 Maya stelae have been discovered at the site, about half of which feature sculpture.

The Sedlec Ossuary is a small Roman Catholic chapel, located beneath the Cemetery Church of All Saints (Adventures in Architecture episode 2), part of the former Sedlec Abbey in Sedlec, a suburb of Kutná Hora in the Czech Republic. The ossuary is estimated to contain the skeletons of between 40,000 and 70,000 people, whose bones have, in many cases, been artistically arranged to form decorations and furnishings for the chapel. The ossuary is among the most visited tourist attractions of the Czech Republic, attracting over 200,000 visitors annually.

Four enormous bell-shaped mounds occupy the corners of the chapel. An enormous chandelier of bones, which contains at least one of every bone in the human body, hangs from the center of the nave with garlands of skulls draping the vault. Other works include piers and monstrances flanking the altar, a coat of arms of the House of Schwarzenberg, and the signature of František Rint, also executed in bone, on the wall near the entrance.

Dan Cruickshank’s Adventures in Architecture episode 2, a 2008 series in which he travelled around the world visiting what he considered to be the world’s most unusual and interesting buildings.