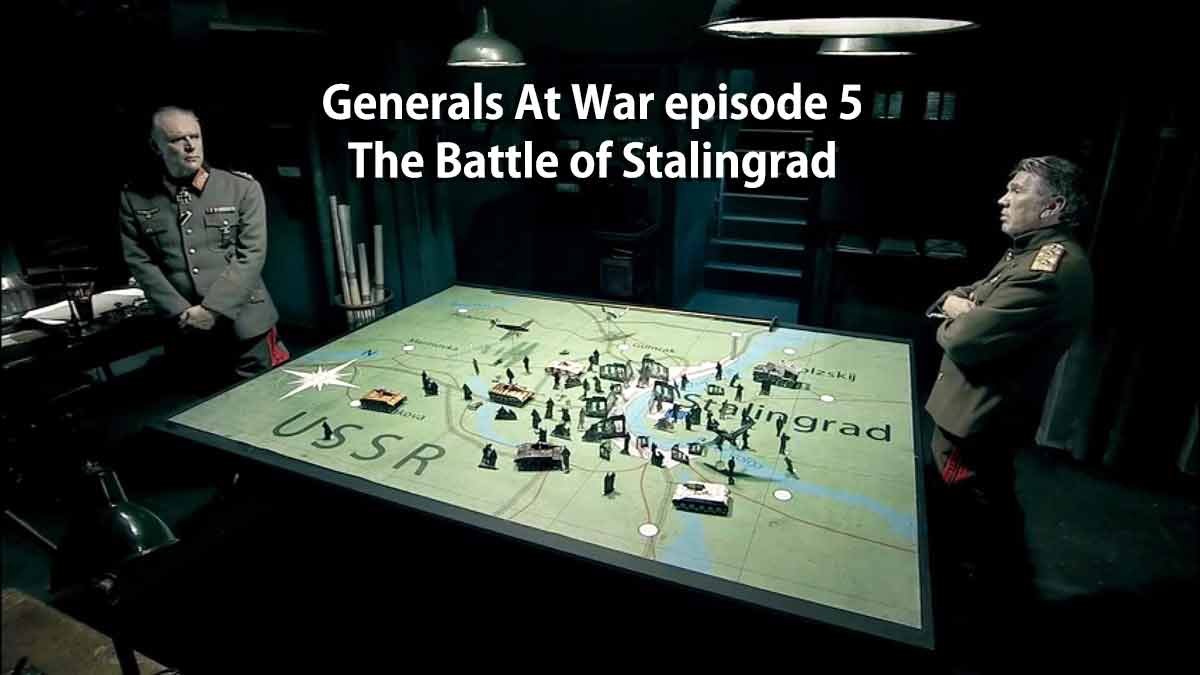 Generals At War episode 5 – The Battle of Stalingrad: 1942 – as the Germans storm across the Soviet Union, Hitler becomes obsessed with taking Stalingrad – the city which bears the name of his arch-enemy Joseph Stalin. The German army is led by General Paulus, a meticulous war gamer.

Facing him across the map table is Soviet General Chuikov – a hardened fighter, not afraid to get his hands dirty. Paulus is confident he will soon bring the city to its knees. But the German army reduces Stalingrad to rubble so successfully, that the ruined city actually works against them. It blocks their tanks and creates the perfect killing ground for Russian snipers and street fighters.

In the Battle of Stalingrad (23 August 1942 – 2 February 1943), Germany and its allies fought the Soviet Union for control of the city of Stalingrad (now Volgograd) in Southern Russia. Marked by fierce close-quarters combat and direct assaults on civilians in air raids, it is one of the bloodiest battles in the history of warfare, with an estimated 2 million total casualties. After their defeat at Stalingrad, the German High Command had to withdraw considerable military forces from the Western Front to replace their losses.

The German offensive to capture Stalingrad began in August 1942, using the 6th Army and elements of the 4th Panzer Army. The attack was supported by intense Luftwaffe bombing that reduced much of the city to rubble. The battle degenerated into house-to-house fighting, as both sides poured reinforcements into the city. By mid-November, the Germans had pushed the Soviet defenders back at great cost into narrow zones along the west bank of the Volga River.

On 19 November, the Red Army launched Operation Uranus, a two-pronged attack targeting the weaker Romanian and Hungarian armies protecting the 6th Army’s flanks. The Axis flanks were overrun and the 6th Army was cut off and surrounded in the Stalingrad area. Adolf Hitler was determined to hold the city at all costs and forbade the 6th Army from attempting a breakout; instead, attempts were made to supply it by air and to break the encirclement from the outside. Heavy fighting continued for another two months. At the beginning of February 1943, the Axis forces in Stalingrad, having exhausted their ammunition and food, surrendered:932 after five months, one week and three days of fighting.

Friedrich Wilhelm Ernst Paulus (23 September 1890 – 1 February 1957) was a German field marshal during World War II who commanded the 6th Army during the Battle of Stalingrad (August 1942 to February 1943). The battle ended in disaster for the Wehrmacht when Soviet forces encircled the Germans within the city, leading to the ultimate defeat and capture of about 265,000 German personnel, their Axis allies and collaborators.

Paulus fought in World War I and saw action in France and the Balkans. He was considered a promising officer; by the time World War II broke out he had been promoted to major general. Paulus took part in the Poland and Low Countries campaigns, after which he was named deputy chief of the German General Staff. In that capacity, Paulus helped plan the invasion of the Soviet Union.

Vasily Ivanovich Chuikov (12 February 1900 – 18 March 1982) was a Soviet military officer. He was the commander of the 62nd Army which saw heavy combat during the Battle of Stalingrad. Following World War II, Chuikov was Chief of the Group of Soviet Forces in Germany (1949–53), commander of the Kiev Military District (1953–60), Chief of the Soviet Armed Forces and Deputy Minister of Defense (1960–64), and head of the Soviet Civil Defense Forces (1961–72).

Chuikov was twice awarded the titles Hero of the Soviet Union (1944 and 1945) and was awarded the Distinguished Service Cross by the United States for his actions during the Battle of Stalingrad. In 1955, he was named a Marshal of the Soviet Union. Following his death in 1982, he was interred at the Stalingrad memorial at Mamayev Kurgan, which had been the site of heavy fighting.

Title
Generals At War episode 5 - The Battle of Stalingrad
Description

Generals At War episode 5 - The Battle of Stalingrad: the Germans storm across the Soviet Union, Hitler becomes obsessed with taking Stalingrad

Bake Off: The Professionals episode 1 2022

Bake Off: The Professionals episode 1 2022: Liam Charles and new-co-host Stacey Solomon present the return of the Channel 4 baking challenge with knobs on, as patisserie teams from establishments in Manchester, Cumbria, Wiltshire, Birmingham and London compete to be crowned the best in Britain. To kick things off, no-nonsense judges Benoit Blin and Cherish […]

Chelsea Flower Show episode 5 2022: Emotions are running high at Chelsea as the all-important medals are revealed. Monty Don and Joe Swift bring us the highlights of the garden awards, while Carol Klein shares the triumphs of the Pavilion medals.     Textile queen Cath Kidston joins us on a garden she’s helped to […]

Chelsea Flower Show episode 4 2022: It’s Medals Day at Chelsea, and Angellica Bell and Nicki Chapman kick-off our coverage with an overview of this year’s big winners. Toby Buckland brings us the hottest design tips to give our gardens some Chelsea magic for summer entertaining. Derry Girls star Siobhan McSweeney makes her first trip […]

Secrets of Size episode 1 – Atoms to Supergalaxies: What would the universe look like if you were a billion times smaller or a billion times bigger? In this mind-bending series, Jim Al-Khalili will look at the universe across its vast range of size, ranging from the tiniest objects measuring just a few atoms, to […]

Lost Kingdoms of South America episode 1: Archaeologist Dr Jago Cooper embarks on an epic journey into the remote Peruvian Andes in search of the mysterious Chachapoya people. Once numbering half a million, they were known as the ‘People of the Clouds’. Dr Cooper reveals how they developed sophisticated methods of recording stories, traded in […]