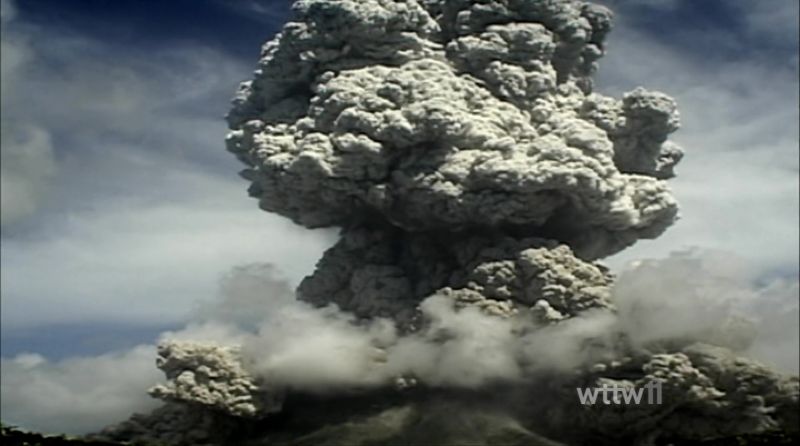 On the morning of August 27, 1883, the rumbling volcano of Krakatoa stood more than 6,000 feet high, with a diameter of approximately 10 miles. Later that day, this giant cone exploded so violently it was literally blown away. The effects of the volcanic explosion caused tidal wave more than 140 feet high; one ship was carried more than two miles inland. Hail-sized stones fell as far as 100 miles away, and the city of Jakarta fell into total darkness. For many of the area’s inhabitants, Armageddon had arrived. Over 36,000 people were killed immediately, and countries all over the globe were affected by the volcano’s devastating after-effects.

The program also incorporates the latest scientific theories of why Krakatoa exploded with the largest blast ever heard in human history.

The eruption of Krakatoa was one of the best-documented natural cataclysms in history; from the first indications that something was amiss to the final explosion, each step was witnessed and recorded by the Dutch settlers living in the region. KRAKATOA brings to life the story of this mammoth eruption, using dramatic recreation, contemporary documentary footage and breathtaking special effects.
Krakatoa is a 90-minute drama-documentary that recreates the final days of the killer volcano. Utilising location filming, documentary footage and special effects the program brings to life the human stories of those caught in the lethal aftermath of the cataclysmic volcanic eruption.

When Krakatoa erupted it did so with such terrible force it was felt around the world. A pillar of dense black smoke spewed 50 miles into the sky and the resulting blanket of volcanic ash contaminated the atmosphere for years afterwards. Giant waves reached heights of 40 metres above sea level, devastating everything in their path and hurling ashore coral blocks weighing as much as 600 tons. When the eruption ended only a third of Krakatoa, formerly 5 x 9 km, remained above sea level. The human cost will never be precisely known, but over 36,000 people died immediately and many more later.

The 1883 eruption of Krakatoa (Indonesian: Letusan Krakatau 1883) in the Sunda Strait began on the afternoon of Sunday, 26 August 1883—with origins as early as that May—and peaked on the late morning of Monday, 27 August 1883, when over 70% of the island of Krakatoa and its surrounding archipelago were destroyed as it collapsed into a caldera.

The eruption was one of the deadliest and most destructive volcanic events in recorded history and explosions were so violent that they were heard 3,110 kilometres (1,930 mi) away in Perth, Western Australia, and Rodrigues near Mauritius, 4,800 kilometres (3,000 mi) away. At least 36,417 deaths are attributed to the eruption and the tsunamis it created.

Significant additional effects were also felt around the world in the days and weeks after the volcano’s eruption. Additional seismic activity continued until February 1884; reports of seismic activity after October 1883 were later dismissed by Rogier Verbeek’s investigation into the eruption.

Ships as far away as South Africa rocked as tsunamis hit them, and the bodies of victims were found floating in the ocean for months after the event. The tsunamis which accompanied the eruption were believed to have been caused by gigantic pyroclastic flows entering the sea; each of the four great explosions was accompanied by large pyroclastic flows resulting from the gravitational collapse of the eruption columns.

This caused several cubic kilometres of material to enter the sea, displacing an equal volume of seawater. The town of Merak was destroyed by a tsunami which was 46 metres high. Some of the pyroclastic flows reached the Sumatran coast as much as 40 km (25 mi) away, having apparently moved across the water on a cushion of superheated steam. There are also indications of submarine pyroclastic flows reaching 15 km (9.3 mi) from the volcano.

Smaller waves were recorded on tidal gauges as far away as the English Channel. These occurred too soon to be remnants of the initial tsunamis and may have been caused by concussive air waves from the eruption. These air waves circled the globe several times and were still detectable on barographs five days later.