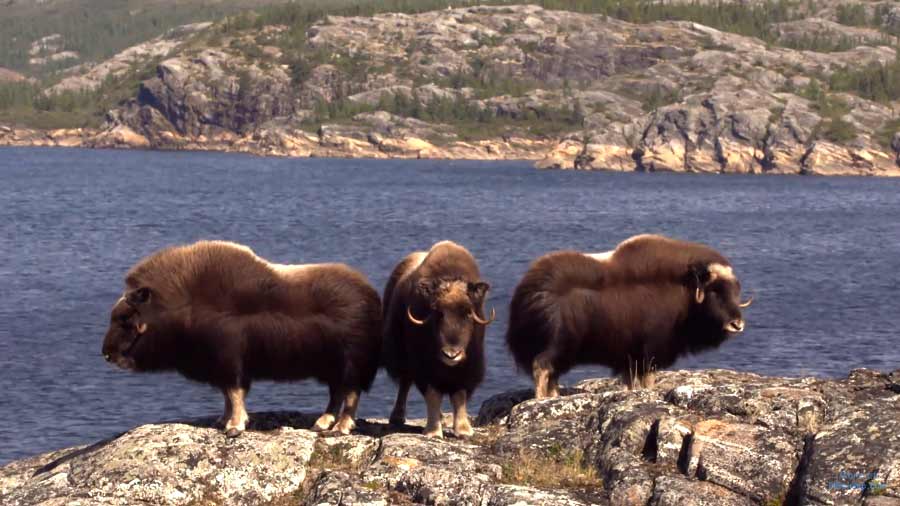 As the days shorten and the temperature drops, the inhabitants of Nunavik, Quebec prepare to face the approaching arctic winter. Watch as muskoxen fatten up, ptarmigans hunt for berries, and Inuit make use of the last warm days of the year.

Nunavik – Fall on the Tundra

Nunavik is a vast territory, larger than the U.S. state of California, located in the northernmost part of Quebec. It lies in both the Arctic and subarctic climate zones. All together, about 12,000 people live in communities, and this number has been growing in line with the tendency for high population growth in indigenous communities.

Nunavik is separated from the territory of Nunavut by Hudson Bay to the west and Hudson Strait and Ungava Bay to the north. Nunavik shares a border with the Côte-Nord region of Quebec and the Labrador region of the province of Newfoundland and Labrador. The Ungava Peninsula forms the northern two-thirds of the region.

There are no road links between Nunavik and southern Quebec, although the Trans-Taiga Road of the Jamésie region ends near the 55th parallel on the Caniapiscau Reservoir, several hundred kilometers south of Kuujjuaq. There is a year-round air link to all villages and seasonal shipping in the summer and autumn. Parts of the interior of southern Nunavik can be reached using several trails which head north from Schefferville.

The climate is a severe one dominated by the long and bitterly cold winters as the seas to the west, east and north freeze over, eliminating maritime moderation. Since this moderation exists in summer when the surrounding sea thaws, even those temperatures are subdued. Inukjuak for example has summer highs averaging just 13 °C (55 °F) with January highs of −21 °C (−6 °F).

The muskox, also spelled musk ox and musk-ox, is an Arctic hoofed mammal of the family Bovidae, noted for its thick coat and for the strong odor emitted by males during the seasonal rut, from which its name derives.

This musky odor is used to attract females during mating season. Its Inuktitut name “umingmak” translates to “the bearded one”. Its Woods Cree names “mâthi-môs” and “mâthi-mostos” translate to “ugly moose” and “ugly bison”, respectively. Muskoxen primarily live in Greenland and the Canadian Arctic of the Northwest Territories and Nunavut, with introduced populations in the American state of Alaska, the Canadian territory of Yukon, the Scandinavian Peninsula, and Siberia.

As a member of the subfamily Caprinae of the family Bovidae, the muskox is more closely related to sheep and goats than to oxen; it is placed in its own genus, Ovibos (Latin: “sheep-ox”). It is one of the two largest extant members of Caprinae, along with the similarly sized takin.

While the takin and muskox were once considered possibly closely related, the takin lacks common ovibovine features, such as the muskox’s specialized horn morphology, and genetic analysis shows that their lineages actually separated early in caprine evolution. Instead, the muskox’s closest living relatives appear to be the gorals of the genus Naemorhedus, nowadays common in many countries of central and east Asia. The vague similarity between takin and muskox must therefore be considered an example of convergent evolution.

The ptarmigan’s genus name, Lagopus, is derived from Ancient Greek lagos, meaning “hare”, + pous, “foot”, in reference to the bird’s feathered legs. The species name, muta, comes from New Latin and means “mute”, referring to the simple croaking song of the male. It was for a long time misspelt mutus, in the erroneous belief that the ending of Lagopus denotes masculine gender. However, as the Ancient Greek term λαγώπους lagṓpous is of feminine gender, and the species name has to agree with that, the feminine muta is correct.

The word ptarmigan comes from the Scottish Gaelic tàrmachan, literally croaker. The silent initial p was added in 1684 by Robert Sibbald through the influence of Greek, especially pteron, “wing”, “feather”, or “pinion”