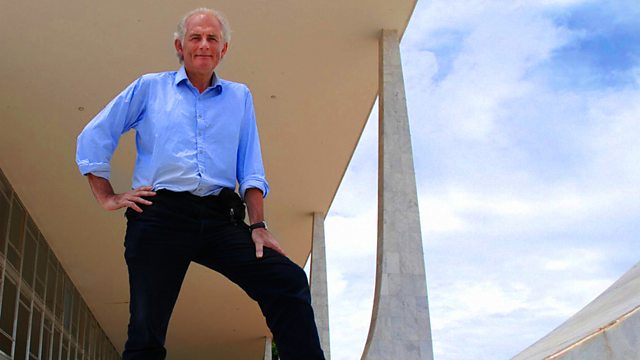 Dan Cruickshank’s Adventures in Architecture episode 5 – Connections: Dan sets out to reveal how architecture enables people to live together across the world. He finds vibrant communities in extraordinary buildings and towns across the globe – but why do some places succeed and others fail?

He visits Brasilia, an ideal city built by communists, which is now the preserve of the super-rich. In the Middle East he travels to Damascus, the oldest continuously inhabited city in the world, to unravel the secrets of its longevity.

The Rockefeller Centre in New York is one of the city’s most famous skyscrapers – but how did a building borne from the American Depression become a ‘city within a city’? And Dan explores Dharavi in Mumbai, the biggest slum in India – a functioning home to millions, but now under threat of demolition.

Damascus is the capital of Syria; it became the country’s largest city in the early 2010s, following the decline in population of Aleppo during the battle for the city. It is colloquially known in Syria as aš-Šām and titled the “City of Jasmine”. Damascus is a major cultural center of the Levant and the Arab world. The city had an estimated population of 2,079,000 as of 2019.

In south-western Syria, Damascus is the center of a large metropolitan area of 2.7 million people (2004). Embedded on the eastern foothills of the Anti-Lebanon mountain range 80 kilometres (50 mi) inland from the eastern shore of the Mediterranean on a plateau 680 metres (2,230 ft) above sea level, Damascus experiences a dry climate because of the rain shadow effect. The Barada River flows through Damascus.

Damascus is one of the oldest continuously inhabited cities in the world. First settled in the second millennium BC, it was chosen as the capital of the Umayyad Caliphate from 661 to 750. After the victory of the Abbasid dynasty, the seat of Islamic power was moved to Baghdad. Damascus saw its importance decline throughout the Abbasid era, only to regain significant importance in the Ayyubid and Mamluk periods. Today, it is the seat of the central government and all of the government ministries. As of September 2019, eight years into the ongoing Syrian Civil War, Damascus was named the least livable city in the Global Liveability Ranking.

Rockefeller Center is a large complex consisting of 19 commercial buildings covering 22 acres (89,000 m2) between 48th Street and 51st Street in Midtown Manhattan, New York City. The 14 original Art Deco buildings, commissioned by the Rockefeller family, span the area between Fifth Avenue and Sixth Avenue, split by a large sunken square and a private street called Rockefeller Plaza. Later additions include 75 Rockefeller Plaza across 51st Street at the north end of Rockefeller Plaza, and four International Style buildings located on the west side of Sixth Avenue.

In 1928, the site’s then-owner, Columbia University, leased the land to John D. Rockefeller Jr., who was the main person behind the complex’s construction. Originally envisioned as the site for a new Metropolitan Opera building, the current Rockefeller Center came about after the Met could not afford to move to the proposed new building. Various plans were discussed before the current one was approved in 1932. Construction of Rockefeller Center started in 1931, and the first buildings opened in 1933. The core of the complex was completed by 1939.

The original center has several sections. Radio City, along Sixth Avenue and centered on 30 Rockefeller Plaza, includes Radio City Music Hall and was built for RCA’s radio-related enterprises such as NBC. The International Complex along Fifth Avenue was built to house foreign-based tenants. The remainder of the original complex originally hosted printed media as well as Eastern Air Lines. While 600 Fifth Avenue is located at the southeast corner of the complex, it was built by private interests in the 1950s and was only acquired by the center in 1963.

Dharavi is a locality in Mumbai, Maharashtra, India, considered to be one of Asia’s largest slums. Dharavi has an area of just over 2.1 square kilometres (Dan Cruickshank’s Adventures in Architecture episode 5) and a population of about 1,000,000. With a population density of over 277,136/km2 (717,780/sq mi), Dharavi is one of the most densely populated areas in the world.

The Dharavi slum was founded in 1884 during the British colonial era, and grew because the expulsion of factories and residents from the peninsular city centre by the colonial government and from the migration of rural Indians into urban Mumbai. For this reason, Dharavi is currently a highly diverse settlement religiously and ethnically.

Dharavi has an active informal economy in which numerous household enterprises employ many of the slum residents —leather, textiles and pottery products are among the goods made inside Dharavi. The total annual turnover has been estimated at over US$1 billion.

Dharavi has suffered from many epidemics and other disasters, including a widespread plague in 1896 which killed over half of the population of Mumbai. Sanitation in the slums remains poor.

Dan Cruickshank's Adventures in Architecture episode 5: Dan sets out to reveal how architecture enables people to live together across the world.