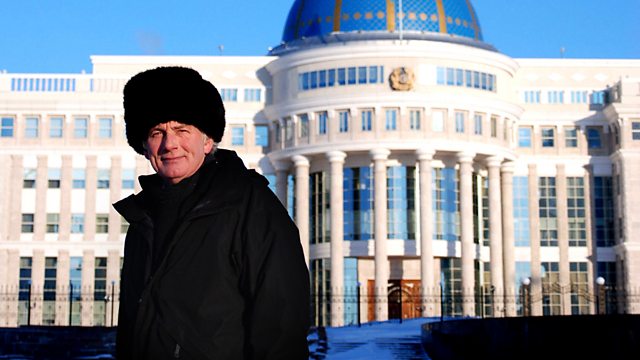 Historian and writer Dan Cruickshank celebrates architecture as a creative force as he explores the world’s greatest cities, buildings and monuments. Dan examines buildings as gigantic statements of power. The fantasies of dictators, kings, sultans, warriors and the ruling classes are all exposed as Dan explores the world’s palaces of power in Romania, the Middle East, the American South, Turkey and Kazakhstan.

Dan tells the story of Ceausescu’s Palace in Romania, a colossal palace built by the 20th century’s last communist dictator. He then travels to the Middle East to see Marqab Castle in Syria, constructed by the Crusaders to vanquish Muslims.

In New Orleans Dan explores an imposing plantation house which is in stark contrast to the slave cabins that it sits next to, and explores the living legacy of slavery. He also tells the history of the Topkapi Harem in Istanbul, a place where women too were slaves – but where they could also give birth to the country’s next emperor. And finally, he visits Astana in Kazakhstan, one of the newest capital cities of the 21st century.

Palace of the Parliament

The building was designed and supervised by chief architect Anca Petrescu, with a team of approximately 700 architects, and constructed over a period of 13 years (1984–97) in Socialist realist and modernist Neoclassical architectural forms and styles, with socialist realism in mind. The Palace was ordered by Nicolae Ceaușescu (1918–1989), the president of Communist Romania and the second of two long-ruling heads of state in the country since World War II, during a period in which the personality cult of political worship and adoration increased considerably for him and his family.

Margat, also known as Marqab, is a castle near Baniyas, Syria, which was a Crusader fortress and one of the major strongholds of the Knights Hospitaller. It is located around 2 kilometres (1.2 mi) from the Mediterranean coast and approximately 6 kilometres (3.7 mi) south of Baniyas. The castle remained in a poor state of preservation until 2007 when some reconstruction and renovation began.

Margat is located on a hill formed by an extinct volcano high about 360 metres (Adventures in Architecture episode 6) above sea level on the road between Tripoli and Latakia, overlooking the Mediterranean Sea.

According to Arab sources, the site of Margat Castle was first fortified in 1062 by Muslims who continued to hold it within the Christian Principality of Antioch in the aftermath of the First Crusade. When the Principality was defeated at the Battle of Harran in 1104, the Byzantine Empire took advantage of their weakness and captured Margat[a] from the Muslims. A few years later it was captured by Tancred, Prince of Galilee, regent of Antioch, and became part of the Principality.

In the 1170s, it was controlled by Reynald II Mazoir [de] of Antioch as a vassal of the count of Tripoli. The fortress was so large that it had its own household officials and a number of rear-vassals. Reynaud’s son Bertrand sold it to the Hospitallers in 1186 as it was too expensive for the Mazoir family to maintain. After some rebuilding and expansion by the Hospitallers it became their headquarters in Syria. Under Hospitaller control, its fourteen towers were thought to be impregnable.

In 1188, Saladin marched on Margat having left Krak des Chevaliers in search of easier prey. According to Abu’l-Fida, “Recognising that Maqab was impregnable and that he had no hope of capturing it, he passed on to Jabala”. It was one of the few remaining territories left in Christian hands after Saladin’s conquests.