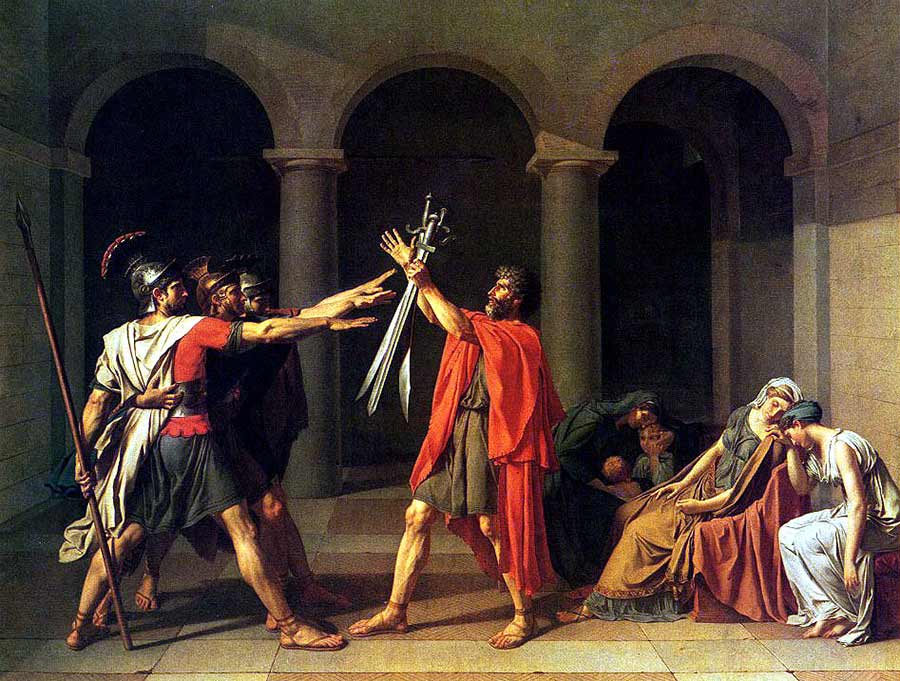 Power of Art - Jacques-Louis David - Oath of the Horatii

Power of Art – David: Painting became an important means of communication for David since his face was slashed during a sword fight and his speech became impeded by a benign tumour that developed from the wound, leading him to stammer.

He was interested in painting in a new classical style that departed from the frivolity of the Rococo period and reflected the moral and austere climate before the French Revolution. David became closely aligned with the republican government and his work was increasingly used as propaganda with the Death of Marat proving his most controversial work.

Jacques-Louis David was a French painter in the Neoclassical style, considered to be the preeminent painter of the era. In the 1780s his cerebral brand of history painting marked a change in taste away from Rococo frivolity toward classical austerity and severity and heightened feeling, harmonizing with the moral climate of the final years of the Ancien Régime.

David later became an active supporter of the French Revolution and friend of Maximilien Robespierre (1758–1794), and was effectively a dictator of the arts under the French Republic. Imprisoned after Robespierre’s fall from power, he aligned himself with yet another political regime upon his release: that of Napoleon, the First Consul of France.

At this time he developed his Empire style, notable for its use of warm Venetian colours. After Napoleon’s fall from Imperial power and the Bourbon revival, David exiled himself to Brussels, then in the United Kingdom of the Netherlands, where he remained until his death. David had many pupils, making him the strongest influence in French art of the early 19th century, especially academic Salon painting.

In the beginning, David was a supporter of the Revolution, a friend of Robespierre, and a member of the Jacobin Club. While others were leaving the country for new and greater opportunities, David stayed behind to help destroy the old order; he was a regicide who voted in the National Convention for the Execution of Louis XVI. It is uncertain why he did this, as there were many more opportunities for him under the King than the new order; some people suggest David’s love for the classical made him embrace everything about that period, including a republican government.

Others believed that they found the key to the artist’s revolutionary career in his personality. Undoubtedly, David’s artistic sensibility, mercurial temperament, volatile emotions, ardent enthusiasm, and fierce independence might have been expected to help turn him against the established order but they did not fully explain his devotion to the republican regime.

Nor did the vague statements of those who insisted upon his “powerful ambition…and unusual energy of will” actually account for his revolutionary connections. Those who knew him maintained that “generous ardor”, high-minded idealism and well-meaning though sometimes fanatical enthusiasm, rather than opportunism and jealousy, motivated his activities during this period.

In June 1825, he resolved to embark on an improved version of his Anger of Achilles (also known as the Sacrifice of Iphigenie); the earlier version was completed in 1819 and is now in the collection of the Kimbell Art Museum in Fort Worth, Texas.

David remarked to his friends who visited his studio “this [painting] is what is killing me” such was his determination to complete the work, but by October it must have already been well advanced, as his former pupil Gros wrote to congratulate him, having heard reports of the painting’s merits. By the time David died, the painting had been completed and the commissioner Ambroise Firmin-Didot brought it back to Paris to include it in the exhibition “Pour les grecs” that he had organised and which opened in Paris in April 1826.

When David was leaving a theater, a carriage struck him, and he later died, on 29 December 1825. At his death, some portraits were auctioned in Paris, they sold for little; the famous Death of Marat was exhibited in a secluded room, to avoid outraging public sensibilities. Disallowed return to France for burial, for having been a regicide of King Louis XVI, the body of the painter Jacques-Louis David was buried in Brussels and moved in 1882 to Brussels Cemetery, while some say his heart was buried with his wife at Père Lachaise Cemetery, Paris.

Power of Art - David: Painting became an important means of communication for David since his face was slashed during a sword fight