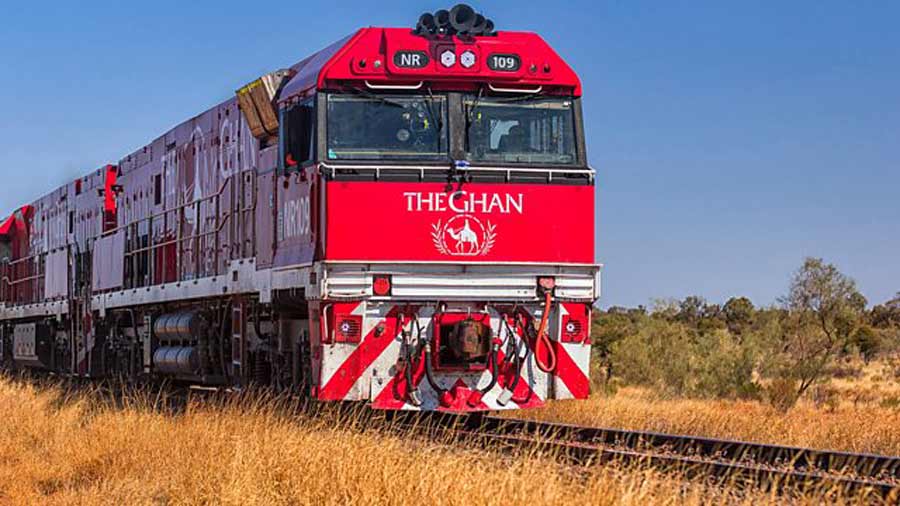 The Ghan – Australia’s Greatest Train Journey: The Ghan follows one of the world’s great rail journeys, taking viewers on an immersive and visually stunning ride on Australia’s most iconic passenger trains. Known as the Ghan, it travels for 2979 kilometres over 54 hours from the bottom to the top of the country.

It begins in the suburban city of Adelaide, traversing a seemingly endless outback that includes the magnificent red centre, ending in the tropical coastal town of Darwin at the north western tip of Australia. The transcontinental train line led to the development of central Australia and the growth of towns along its path – Port Augusta, Alice Springs and Darwin. It took an epic 127 years to complete and was constructed by local Aboriginal surveyors and early immigrants, including the famous Afghan camel drivers, after whom the train is named.

The Ghan is an Australian passenger train service between the cities of Adelaide, Alice Springs and Darwin on the Adelaide–Darwin railway. Operated by Journey Beyond Rail Expeditions, it takes 54 hours to travel the 2,979 kilometres (1,851 mi) with a four-hour stopover in Alice Springs. The Ghan is considered to be one of the world’s great train journeys.

The service’s name is an abbreviated version of its previous nickname, The Afghan Express. The nickname is reputed to have been bestowed in 1923 by one of its crews. Some suggest the train’s name honours Afghan camel drivers who arrived in Australia in the late 19th century to help the British colonisers find a way to reach the country’s interior.

A contrary view is that the name was a veiled insult. In 1891, the railway from Quorn reached remote Oodnadatta where an itinerant population of around 150 cameleers were based, generically called “Afghans”. “The Ghan Express” name originated with train crews in the 1890s as a taunt to officialdom because, when an expensive sleeping car was put on from Quorn to Oodnadatta, “on the first return journey the only passenger was an Afghan”, mocking its commercial viability.

By as early as 1924, because of the notorious unreliability of this fortnightly steam train, European pastoralists commonly called it “in ribald fashion The Afghan Express”. By 1951, when steam engines were replaced by diesel-electric locomotives, this disparaging derivation, like the cameleers, had faded away. Modern marketing has completed the name turnabout.

Construction of what was then known as the Port Augusta to Government Gums Railway began in 1878 when Premier of South Australia William Jervois broke ground at Port Augusta. The 1,070 mm (3 ft 6 in) line reached Hawker in June 1880, Beltana in July 1881, Marree in January 1884 and Oodnadatta in January 1891. Work on the extension to Alice Springs began in 1926, and was completed in 1929. Until then, the final leg of the train journey was still made by camel.

Although there were plans from the beginning to extend the line to Darwin, by the time the extension to Alice Springs had been completed, The Ghan was losing money and the plans for further extension to Darwin were suspended indefinitely. The original Ghan line followed the same track as the overland telegraph, which is believed to be the route taken by John McDouall Stuart during his 1862 crossing of Australia.

The Ghan service was notorious for delays caused by washouts of the track. A flatcar immediately behind the locomotive carried spare sleepers and railway tools, so passengers and crew could repair the line. The very uncertain service via this route was tolerated because steam locomotives needed large quantities of water, and Stuart’s route to Alice Springs was the only one that had sufficient available water.

The Ghan was privatised in 1997 and has since then been operated by Journey Beyond Rail Expeditions (formerly known as Great Southern Rail), initially as part of the Serco Group. Great Southern Rail was sold to Allegro Funds, a Sydney investment fund, in March 2015.

The train usually runs weekly year-round. During December 2012 and January 2013 it ran only once every two weeks. Until 2016, a second service operated between June and September. The train stops at Adelaide, Alice Springs, Katherine and Darwin; the stops at Alice Springs and Katherine allow time for passengers to take optional tours.

Ancient Aliens – The Human Experiment: Scientists now know that seven human-like species lived alongside Homo sapiens for thousands of years. But why is it that only humans survived? Is it possible that we were the product of extraterrestrial experimentation? Ancient Astronaut theorists Giorgio A. Tsoukalos. David Childress and William Henry will be joined by […]

Chelsea Flower Show episode 15 2021: It’s the end of the week at the Chelsea Flower Show, and Monty Don and Joe Swift have the honour of revealing the Plant of the Year and the winner of the BBC RHS People’s Choice Award 2021.     Texas frontwoman Sharleen Spiteri reveals the gorgeous green haven […]

Great British Bake Off – An Extra Slice – episode 1 2021: Jo Brand celebrates the best bits from the week’s show, with unseen footage of Cake Week from the tent and an exclusive interview with the first baker to leave. She is also joined by celebrity fans Sarah Millican, Sunetra Sarker and Iain Stirling […]

Chelsea Flower Show episode 14 2021: Sophie Raworth and Joe Swift celebrate the end of a wonderful week at the RHS Chelsea Flower Show. They reveal the winner of the BBC RHS People’s Choice Award 2021, Arit Anderson shares some top design tips from the showground, and Joe takes a look at the new plants […]

Chelsea Flower Show episode 13 2021: Celebrating a glorious week at RHS Chelsea, Angellica Bell and Nicki Chapman are joined by comedian Joel Dommett and his mother Penny. There is a mini masterclass on garden design from acclaimed Chelsea regular Sarah Eberle, as well as tips on what to do with a bumper harvest, and […]