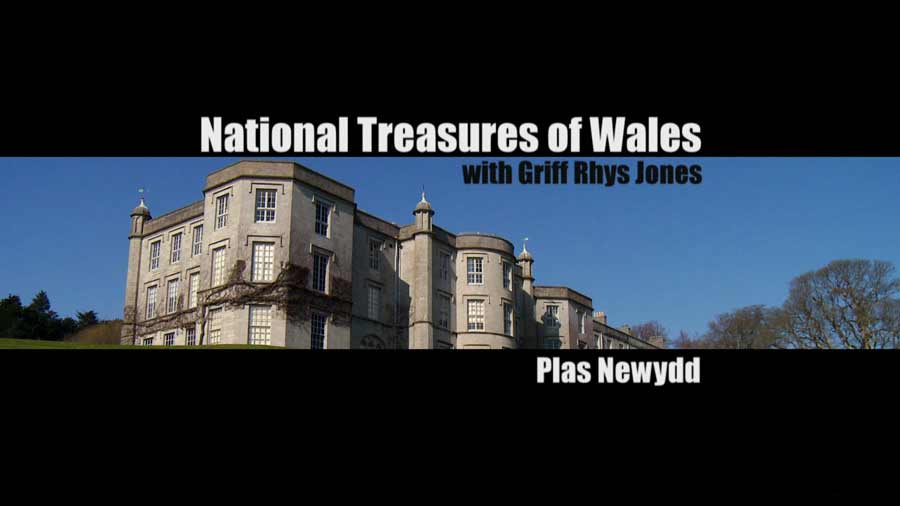 National Treasures of Wales – Plas Newydd episode 2: In this programme, he visits Plas Newydd on the island of Anglesey in north west Wales, which the Trust acquired in the 1970s. Once it was the family home of the Marquis of Anglesey, and now property manager Nerys Jones has to think of new ways to attract visitors to this remote location.

Griff investigates how this great stately home is run – and how it survives in these financially straitened times. Griff Rhys Jones discovers how the National Trust, which was started in Wales, deals with the complexities and conflicts involved in looking after some of Wales’s best-loved national treasures.

Plas Newydd is a country house set in gardens, parkland and surrounding woodland on the north bank of the Menai Strait, in Llanddaniel Fab, near Llanfairpwllgwyngyll, Anglesey, Wales. The current building has its origins in 1470, and evolved over the centuries to become one of Anglesey’s principal residences. Owned successively by Griffiths, Baylys and Pagets, it became the country seat of the Marquesses of Anglesey, and the core of a large agricultural estate. The house and grounds, with views over the strait and Snowdonia, are open to the public, having been owned by the National Trust since 1976.

The house is set within an outstanding park, landscaped at the turn of the 18th and 19th centuries. The design included input from Humphry Repton, and his trademark Red Book of before and after landscape views is still extant. With its extensive waterside site, superb location, and views of the Menai Strait and Snowdonia, it is the only Anglesey site to be classed as Grade I in the Cadw/ICOMOS Register of Parks and Gardens of Special Historic Interest in Wales. It is within the Anglesey Area of Outstanding Natural Beauty and is within an Environmentally sensitive area.

In January 2010, the grounds became the first part of North Wales to be included in Google Street View, thanks to a scheme to include National Trust properties by using the Google Trike where vehicular access is limited.

National Treasures of Wales - Plas Newydd episode 2: In this programme, he visits Plas Newydd on the island of Anglesey in north west Wales