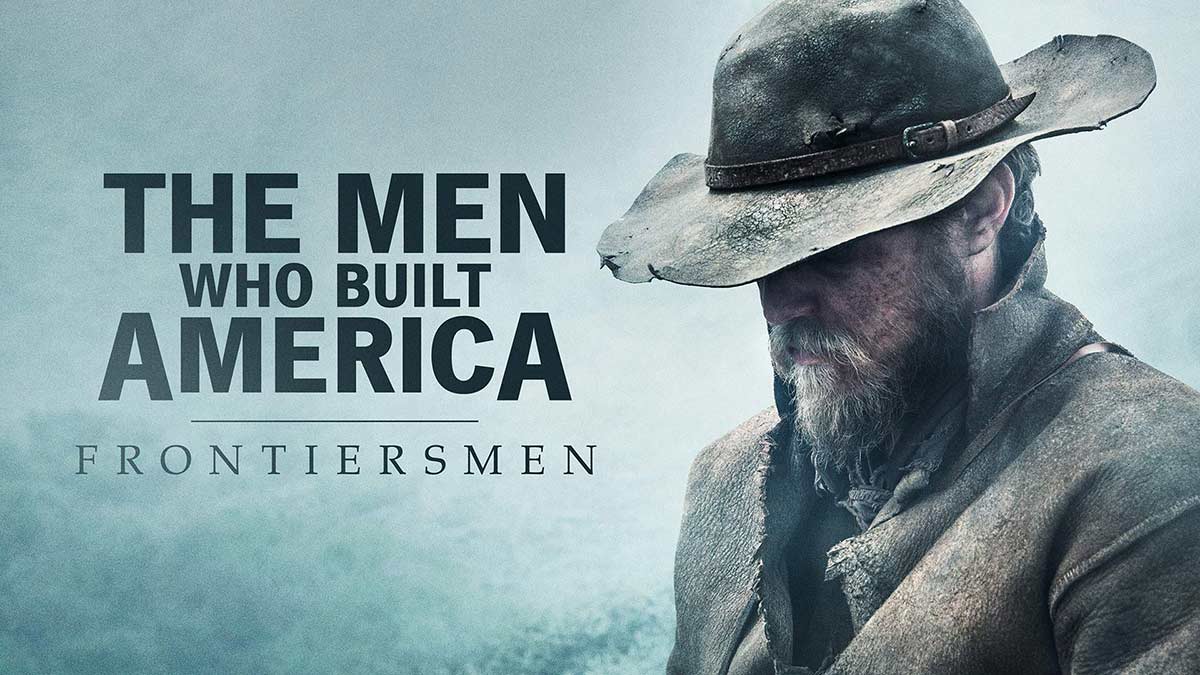 The Men Who Built America episode 1 - Into the Wilderness

The Men Who Built America episode 1 – Into the Wilderness: During the height of American Revolutionary War, the fighting spreads beyond the colonies into the wildness. Pioneer Daniel Boone establishes the settlement Boonesborough, Kentucky in Kentucky Territory. It is soon threatened by the Shawnee and their leader Blackfish who allied with the British to regain their land. When the war ends with the signing of the Treaty of Paris and the British surrender, the Native Americans do not. In 1783, in the Northwest Territory, warrior Tecumseh ignites the fight for the frontier out west.

A look at the lives of iconic pioneers such as Daniel Boone, Lewis and Clark, Tecumseh, Davy Crocket and Andrew Jackson as they traveled across America, starting in The Men Who Built America episode 1 with Daniel Boone.

Daniel Boone  was an American pioneer and frontiersman whose exploits made him one of the first folk heroes of the United States. Boone became famous for his exploration and settlement of what is now Kentucky, which was then beyond the western borders of the Thirteen Colonies. Despite resistance from American Indians, for whom Kentucky was a traditional hunting ground, in 1775 Boone blazed the Wilderness Road through the Cumberland Gap and into Kentucky. There he founded Boonesborough, one of the first English-speaking settlements west of the Appalachian Mountains. By the end of the 18th century, more than 200,000 people entered Kentucky by following the route marked by Boone.

Boone served as a militia officer during the Revolutionary War (1775–1783), which, in Kentucky, was fought primarily between American settlers and British-allied American Indians. Boone was captured by Shawnees in 1778 and adopted into the tribe, but he escaped and continued to help defend the Kentucky settlements. He was elected to the first of his three terms in the Virginia General Assembly during the war, and fought in the Battle of Blue Licks in 1782, one of the last battles of the American Revolution. Boone worked as a surveyor and merchant after the war, but he went deep into debt as a Kentucky land speculator. Frustrated with legal problems resulting from his land claims, in 1799 Boone resettled in Missouri, where he spent most of the last two decades of his life.

Boone (Men Who Built America episode 1) remains an iconic, if imperfectly remembered, figure in American history. He was a legend in his own lifetime, especially after an account of his adventures was published in 1784, making him famous in America and Europe. After his death, Boone became the subject of many heroic tall tales and works of fiction. His adventures—real and legendary—helped create the archetypal frontier hero of American folklore. In American popular culture, Boone is remembered as one of the foremost early frontiersmen, even though mythology often overshadows the historical details of his life.

The Shawnee are an Algonquian-speaking ethnic group indigenous to North America. In colonial times they were a semi-migratory Native American nation, primarily inhabiting areas of the Ohio Valley, extending from what became Ohio and Kentucky eastward to West Virginia, Virginia, Pennsylvania, and Western Maryland; south to Alabama and South Carolina; and westward to Indiana and Illinois.

Pushed west by European-American pressure, the Shawnee migrated to Missouri and Kansas. In the 1830s some were removed from the upper Midwest to Indian Territory (now Oklahoma) west of the Mississippi River. Other Shawnee did not remove to Oklahoma until after the Civil War. Today three federally recognized Shawnee tribes, made up of descendants of different historical and kinship groups, are all headquartered in Oklahoma: the Absentee-Shawnee Tribe of Indians of Oklahoma, Eastern Shawnee Tribe of Oklahoma, and Shawnee Tribe.

When the United States declared independence from the British crown in 1776, the Shawnee were divided. They did not support the American rebel cause. Cornstalk led the minority who wished to remain neutral. The Shawnee north of the Ohio River were unhappy about American settlement of Kentucky. Colin Calloway reports that most Shawnees allied with the British against the Americans, hoping to be able to expel the settlers from west of the mountains.

War leaders such as Chief Blackfish and Blue Jacket joined Dragging Canoe and a band of Cherokee people along the lower Tennessee River and Chickamauga Creek against the colonists in that area. Some colonists called this group of Cherokee the Chickamauga, because they lived along that river at the time of what became known as the Cherokee–American wars, during and after the American Revolution. But they were never a separate tribe, as some accounts suggested.

Little is known about him, since he only appears in written historical records during the last three years of his life, primarily because of his interactions with the famous American frontiersmen Daniel Boone and Simon Kenton.

When the Shawnees were defeated by Virginia in Dunmore’s War in 1774 , the resulting peace treaty made the Ohio River the boundary between western Virginia (what is now Kentucky and West Virginia) and American Indian lands in the Ohio Country. Although this treaty was agreed to by Shawnee leaders such as Cornstalk, Blackfish and a number of other leaders refused to acknowledge the loss of their traditional hunting grounds in Kentucky.

Violence along the border escalated with the outbreak of the American Revolutionary War in 1775. As a result, the Chillicothe Shawnees moved their town on the Scioto River further west to the Little Miami River, near what is now Xenia, Ohio. Encouraged and supplied by British officials in Detroit, Blackfish and others launched raids against American settlers in Kentucky, hoping to drive them out of the region. In revenge for the murder of Cornstalk by American militiamen in November 1777, Blackfish set out on an unexpected winter raid in Kentucky, capturing American frontiersman Daniel Boone and a number of others on the Licking River on February 7, 1778. Boone (Men Who Built America episode 1), respected by the Shawnees for his extraordinary hunting skills, was taken back to Chillicothe and adopted into the tribe. The traditional tale is that Boone was adopted by Blackfish himself, although historian John Sugden suggests that Boone was probably adopted by another family.

Boone escaped in June 1778 when he learned that Blackfish was launching a siege of the Kentucky settlement of Boonesborough, which commenced in September of that year. The siege of Boonesborough was unsuccessful, and the Kentuckians, led by Colonel John Bowman, counterattacked Chillicothe the following spring. This raid was also unsuccessful, but Blackfish was shot in the leg, a wound which became infected and was eventually fatal.

Tecumseh was a Shawnee chief, warrior, diplomat, and orator who promoted resistance to the expansion of the United States onto Native American lands. He traveled widely, forming a Native American confederacy and promoting tribal unity. Although his efforts to unite Native Americans ended with his death in the War of 1812, he became an iconic folk hero in American, Indigenous, and Canadian history.

Tecumseh was born in what is now Ohio at time when the far-flung Shawnees were reuniting in their Ohio Country homeland. During his childhood, the Shawnees lost territory to the expanding American colonies in a series of border conflicts. Tecumseh’s father was killed in battle against American colonists in 1774. Tecumseh was thereafter mentored by his older brother Cheeseekau, a noted war chief who died fighting Americans in 1792. As a young war leader, Tecumseh joined Shawnee Chief Blue Jacket’s war to defend against further American encroachment, which ended in defeat at the Battle of Fallen Timbers in 1794 and the loss of most of Ohio in the 1795 Treaty of Greenville.

In 1805, Tecumseh’s younger brother Tenskwatawa, who came to be known as the Shawnee Prophet, founded a religious movement, calling upon Native Americans to reject European influences and return to a more traditional lifestyle. In 1808, Tecumseh and Tenskwatawa established Prophetstown, a village near present-day Lafayette, Indiana, that grew into a large, multi-tribal community. Tecumseh traveled constantly, spreading the Prophet’s message and eclipsing his brother in prominence. He proclaimed that Native Americans owned their lands in common, and urged tribes not cede more territory unless all tribes agreed. His message alarmed American leaders as well as Native leaders who sought accommodation with the United States. In 1811, when Tecumseh was in the south recruiting allies, Americans under William Henry Harrison defeated Tenskwatawa at the Battle of Tippecanoe and destroyed Prophetstown.