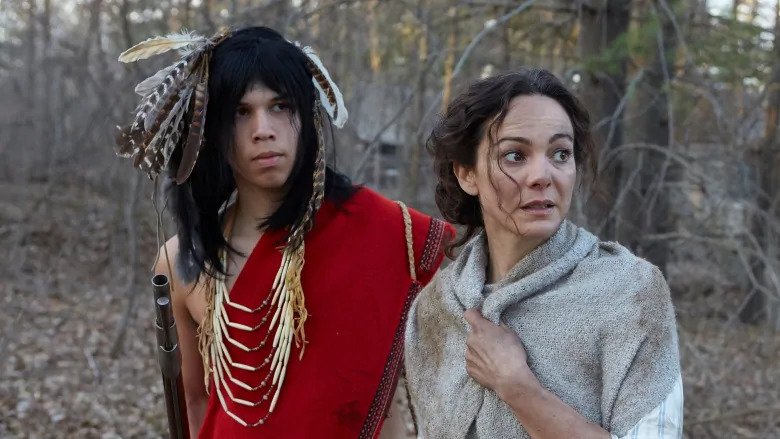 Canada the Story of Us episode 3: The War of 1812 is Canada’s War of Independence. With the British Empire entrenched in a European war, a disparate group of Indigenous, French Canadian, Scottish, African Canadian and even ex-pat American fighters join together to fight for their new homeland.

The powerful Shawnee Chief Tecumseh has spent his entire adult life fighting the Americans. He leads an army that draws from many Indigenous nations. They are fighting against American westward expansion and to create a homeland for their people. At the start of the War of 1812, Tecumseh makes an alliance with Isaac Brock, commander of the British forces in Upper Canada.

Together, they play psychological warfare against the much larger American army at Fort Detroit, playing on the fears of American General William Hull. Tecumseh and Brock watch as the Americans, terrified of Tecumseh, wave the white flag in surrender, a massive victory for both armies.

Canada the Story of Us episode 3: 14 American ships appear on the shores of York, now Toronto, landing a 2,000-man invading force that overwhelms the Canadian and British soldiers who are defending the capital of Upper Canada. When the American forces breach Fort York’s western wall, British General Sheaffe orders the destruction of their armoury. Captain Tito LeLièvre, a French navy veteran now fighting for the British, volunteers to destroy it.

The armoury contains the explosive equivalent of 14 Tomahawk cruise missiles. He creates a fuse with a trail of black powder and lights it with his gun. The explosion of the magazine kills 38 American soldiers instantly, including their commander, and injures hundreds more. Many British and Canadian soldiers are caught in the blast as well.

In retaliation, the American invaders loot the town, destroy public property and burn the legislative buildings. Their brutality, however, unites the townspeople of York to rise up in resistance.

When American forces take over Queenston, Upper Canada, they make themselves at home, raiding farms and turning homes into impromptu barracks. One of those homes belongs to Laura Secord.

Secord overhears a American commander planning a sneak attack on British forces in the area. Secord sets off on a 30-kilometre trek through American-held woods to warn a British outpost of the impending assault. Hours later, she encounters a group of Indigenous warriors allied with the British, including 16 year-old John Tutela of the Cayuga nation. Tutela and his fellow warriors take Secord to the commander of the British forces in the area, Lieutenant James Fitzgibbon. Fitzgibbon’s Indigenous allies, including Tutela, successfully ambush the Americans, resulting in the capture of over 450 soldiers in the Battle of Beaver Dams.

On the Eastern seaboard, the war plays out on the water: the British colonial government commissions Canadian privateers. Privateers are mercenaries who capture American merchant ships and their valuable goods. The privateers get to keep much of the cargo (which, in some cases, is worth millions of today’s dollars). The war effort, meanwhile, is helped by both the disruption of the American economy and the fear struck into its merchant fleet.

One of the most successful privateer ships is the Liverpool Packet. Captained by Joseph Barss, the Packet once captured nine American schooners in a single day. The loot captured by Barss and privateers like him provides a huge economic stimulus for Canada’s maritime communities, especially Halifax.

Along the banks of the Châteauguay river, a multicultural army defends the heart of Canada — Montreal — against a much larger invading American army. The Americans are desperate to make a final push into Canadian territory and end the increasingly unpopular war. The Canadian force consists of escaped African-American slaves-turned-soldiers, Indigenous warriors and French-Canadian militiamen. It’s commanded by veteran soldier Charles de Salaberry. He uses his men’s knowledge of the land, guerilla warfare and a crafty ruse to push the Americans back across the border.