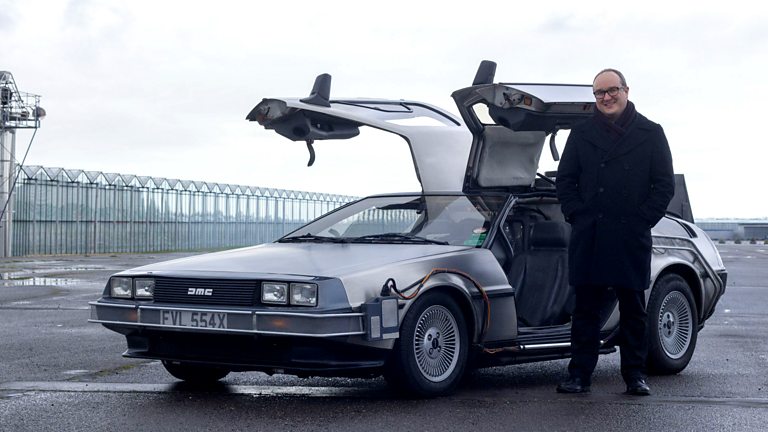 The Real History of Science Fiction episode 4 – Time: Dominic Sandbrook concludes his exploration of the most innovative and imaginative of all genres by considering science fiction’s most alluring theme – time travel.

Having the power to change the past or see the future is a deep-seated human fantasy, and writers and film-makers have embraced its possibilities. From HG Wells’s pioneering scientist in The Time Machine to Back to the Future’s Marty McFly and Doctor Who’s titular Time Lord, we’ve been presented with a host of colourful time travellers and their time machines. But is there always a price to be paid for meddling with the timeline?

Among the contributors of The Real History of Science Fiction episode 4 are David Tennant, Karen Gillan and Steven Moffat (Doctor Who), actor Christopher Lloyd and screenwriter Bob Gale (Back to the Future), actor Scott Bakula (Quantum Leap) and novelist Audrey Niffenegger (The Time Traveler’s Wife).

Herbert George Wells was an English writer. Prolific in many genres, he wrote dozens of novels, short stories, and works of social commentary, history, satire, biography and autobiography. His work also included two books on recreational war games. Wells is now best remembered for his science fiction novels and is often called the “father of science fiction”, along with Jules Verne and the publisher Hugo Gernsback.

During his own lifetime, however, he was most prominent as a forward-looking, even prophetic social critic who devoted his literary talents to the development of a progressive vision on a global scale. A futurist, he wrote a number of utopian works and foresaw the advent of aircraft, tanks, space travel, nuclear weapons, satellite television and something resembling the World Wide Web. His science fiction imagined time travel, alien invasion, invisibility, and biological engineering. Brian Aldiss referred to Wells as the “Shakespeare of science fiction”.

Wells rendered his works convincing by instilling commonplace detail alongside a single extraordinary assumption – dubbed “Wells’s law” – leading Joseph Conrad to hail him in 1898 as “O Realist of the Fantastic!”. His most notable science fiction works include The Time Machine (1895), The Island of Doctor Moreau (1896), The Invisible Man (1897), The War of the Worlds (1898) and the military science fiction The War in the Air (1907). Wells was nominated for the Nobel Prize in Literature four times.

The Time Machine is a science fiction novella by HG Wells, published in 1895 and written as a frame narrative. The work is generally credited with the popularization of the concept of time travel by using a vehicle or device to travel purposely and selectively forward or backward through time. The term “time machine”, coined by Wells, is now almost universally used to refer to such a vehicle or device.

The Time Machine has been adapted into three feature films of the same name, as well as two television versions and many comic book adaptations. It has also indirectly inspired many more works of fiction in many media productions.

HG Wells had considered the notion of time travel before, in a short story titled “The Chronic Argonauts” (1888). This work, published in his college newspaper, was the foundation for The Time Machine.

HG Wells frequently stated that he had thought of using some of this material in a series of articles in the Pall Mall Gazette until the publisher asked him if he could instead write a serial novel on the same theme. Wells readily agreed and was paid £100 (equal to about £12,000 today) on its publication by Heinemann in 1895, which first published the story in serial form in the January to May numbers of The New Review (newly under the nominal editorship of W. E. Henley). Henry Holt and Company published the first book edition (possibly prepared from a different manuscript) on 7 May 1895; Heinemann published an English edition on 29 May. These two editions are different textually and are commonly referred to as the “Holt text” and “Heinemann text”, respectively. Nearly all modern reprints reproduce the Heinemann text.

The Time Traveler’s Wife is the debut novel by the American author Audrey Niffenegger, published in 2003. It is a love story about Henry, a man, with a genetic disorder that causes him to time travel unpredictably, and about Clare, his wife, an artist, who has to cope with his frequent absences and dangerous experiences of reappearing in odd places. Niffenegger, who was frustrated in love when she began the novel, wrote the story as a metaphor for her failed relationships.

The tale’s central relationship came to Niffenegger suddenly and subsequently supplied the novel’s title. The novel, which has been classified as both science fiction and romance, examines the themes of love, loss, and free will. In particular, the novel uses time travel to explore miscommunication and distance in relationships, while also investigating deeper existential questions.

The book was published by MacAdam/Cage, a small publishing firm located in San Francisco, California. The book became a bestseller after an endorsement from author and family friend Scott Turow on The Today Show. As of March 2009, the novel has sold nearly 2.5 million copies in the United States and the United Kingdom. Many reviewers were impressed with Niffenegger’s unique perspectives on time travel. Some praised her characterization of the couple, applauding their emotional depth; while others criticized her writing style as melodramatic and the plot as emotionally trite. The novel won the Exclusive Books Boeke Prize and a British Book Award. A film version starring Rachel McAdams as Clare and Eric Bana as Henry was released in August 2009

The Real History of Science Fiction episode 4 - Time: Dominic concludes his exploration of the most innovative and imaginative of all genres