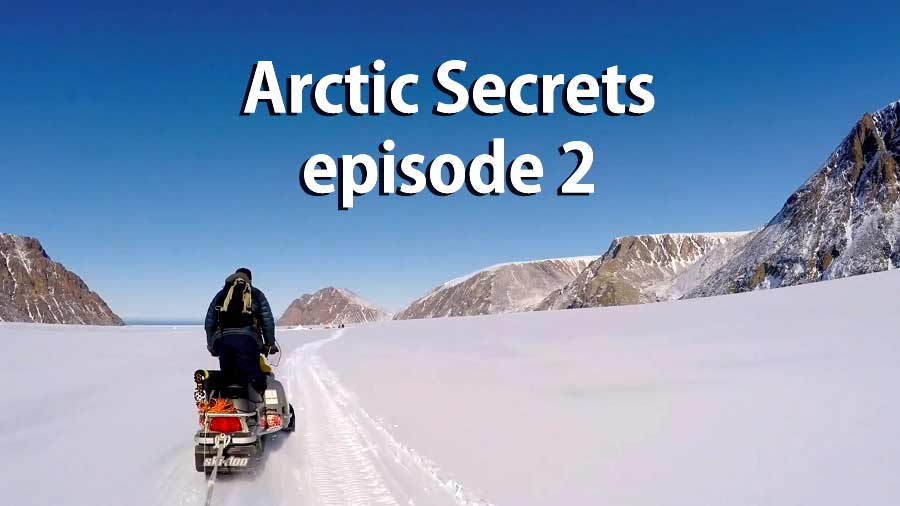 Arctic Secrets episode 2 – Devon Island – Land of Ice: Canada’s Devon Island is the largest uninhabited island in the world – and with good reason. Temperatures below freezing for nine months of the year and an annual rainfall comparable to the Gobi Desert leave the icy landscape so barren that NASA uses it to simulate conditions on Mars. Take an exhilarating expedition into a land where only the most experienced Inuit hunters dare set foot.

In Arctic Secrets episode 2 embark on a journey into the world’s most unforgiving arctic zones, where land and ice are inseparably joined. Swim through the mammoth Mackenzie Delta, or explore the great tundra of Nunavik. These hostile regions yield little for the hardy wildlife and local Inuit tribes that wait patiently for an all-too-brief summer.

Devon Island (Inuit: Tatlurutit) is an island in Canada and the largest uninhabited island on Earth. It is located in Baffin Bay, Qikiqtaaluk Region, Nunavut, Canada. It is one of the larger members of the Canadian Arctic Archipelago, the second-largest of the Queen Elizabeth Islands, Canada’s sixth largest island, and the 27th-largest island in the world. It comprises 55,247 km2 (21,331 sq mi) (slightly smaller than Croatia) of Precambrian gneiss and Paleozoic siltstones and shales.

The highest point is the Devon Ice Cap at 1,920 m (6,300 ft) which is part of the Arctic Cordillera. Devon Island contains several small mountain ranges, such as the Treuter Mountains, Haddington Range and the Cunningham Mountains. The notable similarity of its surface to that of Mars has attracted interest from scientists.

Inuit are a group of culturally similar indigenous peoples inhabiting the Arctic regions of Greenland, Canada and Alaska (United States). The Inuit languages are part of the Eskimo–Aleut family. Inuit Sign Language is a critically endangered language isolate used in Nunavut.

Inuit live throughout most of Northern Canada in the territory of Nunavut, Nunavik in the northern third of Quebec, Nunatsiavut and NunatuKavut in Labrador and in various parts of the Northwest Territories, particularly around the Arctic Ocean, in the Inuvialuit Settlement Region. With the exception of NunatuKavut these areas are known in the Inuit languages as Inuit Nunangat. In Canada, sections 25 and 35 of the Constitution Act of 1982 classify Inuit as a distinctive group of Aboriginal Canadians who are not included under either the First Nations or the Métis.

The Greenlandic Inuit are descendants of Thule migrations from Canada by 1100 AD. Inuit of Greenland are Danish citizens, although not the citizens of the European Union. In the United States, the Alaskan Iñupiat are traditionally located in the Northwest Arctic Borough, on the Alaska North Slope, and on Little Diomede Island.

In both Canada, the United States and Denmark, the term “Eskimo” was once commonly used to describe Inuit and Siberia and Alaska’s Yupik, Iñupiat, and Chukchi[citation needed] peoples. “Inuit” is not accepted as a term for the Yupik and Chukchi; “Eskimo” is the only term that applies across the Yupik, Chukchi, Iñupiat, and Inuit peoples. Since the late 20th century, indigenous people in Canada and Greenlandic Inuit[citation needed] have widely considered “Eskimo” to be an offensive term, and they more frequently identify as “Inuit” for an autonym.

The Mackenzie River flows through a vast, thinly populated region of forest and tundra entirely within the Northwest Territories in Canada, although its many tributaries reach into five other Canadian provinces and territories.

The river’s main stem is 1,738 kilometres (1,080 mi) long, flowing north-northwest from Great Slave Lake into the Arctic Ocean, where it forms a large delta at its mouth. Its extensive watershed drains about 20 percent of Canada. It is the largest river flowing into the Arctic from North America, and including its tributaries has a total length of 4,241 kilometres (2,635 mi), making it the thirteenth longest river system in the world.