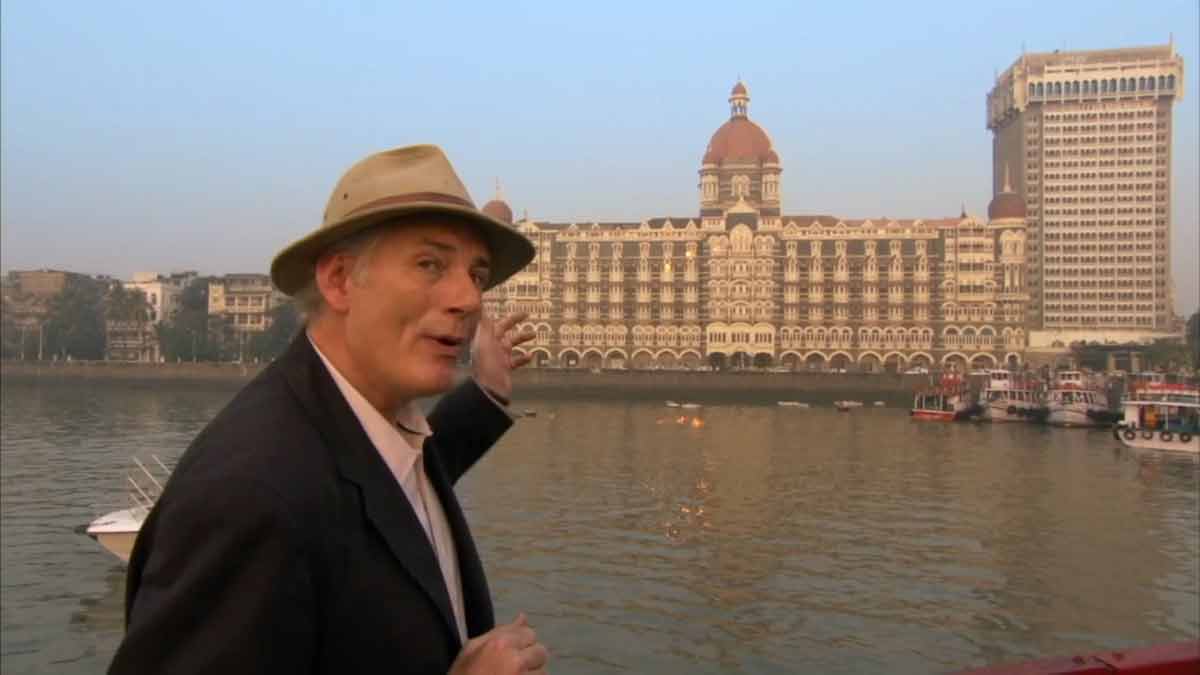 Dan Cruickshank’s Adventures in Architecture episode 8 – Pleasure: In the final episode, Dan explores how architecture gives us pleasure – both to its creators and to the people who enjoy the buildings today.

In India, Dan visits one of the world’s greatest and most luxurious hotels, the Taj in Mumbai. Like a palace sitting at the ocean’s edge, the hotel is a vision from the age of the great maharajahs and the British raj, a spectacular fusion of east and west. And in Germany, Dan goes to the Schloss Neuschwanstein, a fantasy castle created by one of history’s most outrageous monarchs, King Ludwig II. Even today it is the stuff of fantasy for the many millions of visitors who reach its heights in the Bavarian mountains.

Moving to Italy, Dan celebrates the hedonism and excess of ancient Pompeii – visiting the oldest brothel in the world. He then heads for Brazil and the Amazon basin to find opera at the heart of the rainforest – the opera house at Manaus. Built on the back of the rubber trade, the pleasure it brings is a painful mix for the people of the region.

The Taj Mahal Palace Hotel is a heritage, five-star, luxury hotel built in the Saracenic Revival style in the Colaba area of Mumbai, Maharashtra, India, situated next to the Gateway of India.

Historically it was known as the “Taj Mahal Hotel” or simply “The Taj”. The hotel is named after the Taj Mahal, which is located in the city of Agra approximately 1,050 kilometres (650 mi) from Mumbai. It has been considered one of the finest hotels in the East since the time of the British Raj. The hotel was one of the main sites targeted in the 2008 Mumbai attacks.

Part of the Taj Hotels Resorts and Palaces, the hotel has 560 rooms and 44 suites and is considered the flagship property of the group; it employs 1,600 staff. The hotel is made up of two different buildings: the Taj Mahal Palace and the Tower, which are historically and architecturally distinct from each other (Dan Cruickshank’s Adventures in Architecture). The hotel has a long and distinguished history, having received many notable guests, from presidents to captains of industry and stars of show business.

Ratanbai Petit, the second wife of the founder of Pakistan, Muhammad Ali Jinnah, lived in the hotel during her last days in 1929; her sister-in-law, Sylla Tata, had born into the Tata family, builders and owners of the hotel. During World War I, the hotel was converted into a military hospital with 600 beds. The hotel is notorious as the most visible target of the 2008 Mumbai attacks.

Neuschwanstein Castle is a 19th-century historicist palace on a rugged hill above the village of Hohenschwangau near Füssen in southwest Bavaria, Germany. The palace was commissioned by King Ludwig II of Bavaria as a retreat and in honour of Richard Wagner. Ludwig chose to pay for the palace out of his personal fortune and by means of extensive borrowing, rather than Bavarian public funds.

The castle was intended as a private residence for the King, until he died in 1886. It was open to the public shortly after his death. Since then more than 61 million people have visited Neuschwanstein Castle. More than 1.3 million people visit annually, with as many as 6,000 per day in the summer.

The municipality of Schwangau lies at an elevation of 800 m (2,620 ft) at the southwest border of the German state of Bavaria. Its surroundings are characterised by the transition between the Alpine foothills in the south (toward the nearby Austrian border) and a hilly landscape in the north that appears flat by comparison.

In the Middle Ages, three castles overlooked the villages. One was called Schwanstein Castle. In 1832, Ludwig’s father King Maximilian II of Bavaria bought its ruins to replace them with the comfortable neo-Gothic palace known as Hohenschwangau Castle. Finished in 1837, the palace became his family’s summer residence, and his elder son Ludwig (born 1845) spent a large part of his childhood here.

The Amazon Theatre (Portuguese: Teatro Amazonas) is an opera house located in Manaus, in the heart of the Amazon rainforest in Brazil. It is the location of the annual Festival Amazonas de Ópera (Amazonas Opera Festival) and the home of the Amazonas Philharmonic Orchestra which regularly rehearses and performs at the Amazon Theatre along with choirs, musical concerts and other performances.

More than 120 years old, it represents the city’s heyday during the rubber boom. It was chosen by Vogue magazine as one of the most beautiful opera houses in the worldand by Dan Cruickshank’s Adventures in Architecture.

The Amazonas Theatre was built during the Belle Époque at a time when fortunes were made in the rubber boom. Construction of the Amazon Theatre was first proposed in 1881 by a member of the local House of Representatives, Antonio Jose Fernandes Júnior, who envisioned a “jewel” in the heart of the Amazon rainforest.

In 1882, the State legislature approved some limited financing, but this was considered insufficient. Later that year, the president of the Province, José Lustosa Paranaguá, approved a larger budget and initiated a competition for the presentation of plans. The chosen project was made by the Gabinete Português de Engenharia e Arquitectura, an engineering and architecture office from Lisbon. By 1884, construction was ready to begin under the Italian architect Celestial Sacardim. Work proceeded slowly over the following fifteen years with some stops and restarts from 1885 to 1892.

Villa Barbaro, also known as the Villa di Maser, is a large villa at Maser in the Veneto region of northern Italy. It was designed and built by the Italian Renaissance architect Andrea Palladio, with frescos by Paolo Veronese and sculptures by Alessandro Vittoria, for Daniele Barbaro, Patriarch of Aquileia and ambassador to Queen Elizabeth I of England and his brother Marcantonio, an ambassador to King Charles IX of France. The villa was added to the list of World Heritage Sites by UNESCO in 1996.

The land originally belonged to the Arbil and then the Giustiniani families, before becoming property of the Barbaro family. Authorities vary as to the dates given for the building of the villa. The architectural historian Adalbert dal Lago states it was built between 1560 and 1570, while others state that the villa was mostly completed by 1558. Hobson concurs with dal Lago that the date of commencement was probably 1560. By this date Palladio had provided the illustrations for one of Daniele’s publications, a commentary on the writings of the Roman architect Vitruvius.

Hobson credits Daniele with the idea of not only building the villa but also the choice of architect and the sculptor Alessandro Vittoria. While Daniele was better-known as a connoisseur of the arts, it was for the use of Marcantonio’s family and descendants that the villa was intended in the long term.