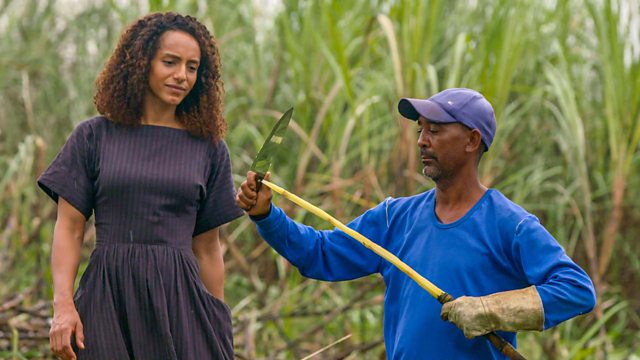 Enslaved with Samuel L Jackson episode 2: Samuel L Jackson – with journalists Afua Hirsch and Simcha Jacobovici – examines how, for over 400 years, the trans-Atlantic slave trade became the greatest wealth-generating machine the world had known and the engine that drove the global economy.

Afua goes to Brazil, once the world’s greatest supplier of sugar, to discover how Europeans’ insatiable appetite for this sweetener drove the explosion of the slave trade in the 17th century, leading to a constant demand for the supply of cheap trans-Atlantic labour to work the plantations. She then visits Bristol, revealing how the enormous profits generated by these enslaved Africans built much of the modern world we live in today.

Jackson reveals how slave owners came up with increasingly inventive ways to turn their losses into profits when trafficked Africans were lost at sea. As the economics of the slave trade began to unravel, one infamous British court case ultimately helped paved the way for abolition. Jackson teams up with DWP, Diving with a Purpose, a group of underwater investigators who view the ocean floor as a graveyard and a crime scene. They dive the Suriname river in South America in search of a Dutch shipwreck called the Leusden, scene of a horrific mass murder and a crime largely forgotten for 300 years.

The vast majority of those who were enslaved and transported in the transatlantic slave trade were people from Central and West Africa, who had been sold by other West Africans, or by half-European “merchant princes” to Western European slave traders (with a small number being captured directly by the slave traders in coastal raids), who brought them to the Americas.

Except for the Portuguese, European slave traders generally did not participate in the raids because life expectancy for Europeans in sub-Saharan Africa was less than one year during the period of the slave trade (which was prior to the development of quinine as a treatment for malaria). The South Atlantic and Caribbean economies were particularly dependent on labour for the production of sugarcane and other commodities. This was viewed as crucial by those Western European states that, in the late 17th and 18th centuries, were vying with each other to create overseas empires.

Upon discovering new lands through their naval explorations, European colonisers soon began to migrate to and settle in lands outside their native continent. Off the coast of Africa, European migrants, under the directions of the Kingdom of Castile, invaded and colonised the Canary Islands during the 15th century, where they converted much of the land to the production of wine and sugar. Along with this, they also captured native Canary Islanders, the Guanches, to use as slaves both on the Islands and across the Christian Mediterranean.

As historian John Thornton remarked, “the actual motivation for European expansion and for navigational breakthroughs was little more than to exploit the opportunity for immediate profits made by raiding and the seizure or purchase of trade commodities”.

Using the Canary Islands as a naval base, Europeans, at the time primarily Portuguese traders, began to move their activities down the western coast of Africa, performing raids in which slaves would be captured to be later sold in the Mediterranean. Although initially successful in this venture, “it was not long before African naval forces were alerted to the new dangers, and the Portuguese ships began to meet strong and effective resistance”, with the crews of several of them being killed by African sailors, whose boats were better equipped at traversing the west African coasts and river systems.