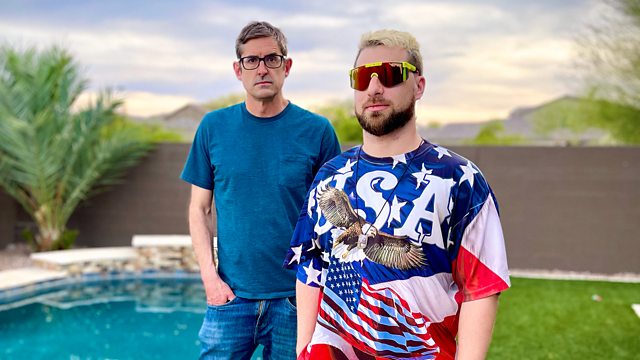 Forbidden America episode 1 – Extreme and Online: Louis Theroux meets the young and highly inflammatory figures of the latest incarnation of the American far right: a political movement born out of the internet but making its presence felt in the real world, including some of those who came to the broader public’s attention through the notorious Capitol Hill riots.

Louis immerses himself in a growing online community that has navigated the threats of de-platforming to gather a vast audience on phones and laptops around the world, promoting an ideology that is racist, misogynistic, homophobic and anti-Semitic, often packaging the most extreme views as ‘irony’.

With the movement’s most prominent voices having an increasing influence away from the digital realm, Louis attempts to understand their recent surge in popularity and challenges the divisive rhetoric that is being streamed to millions of young viewers online.

Louis Theroux returns to the USA to explore the impact of the internet and social media on some of the most controversial corners of American society.

In United States politics, the radical right is a political preference that leans towards extreme conservatism, nationalist White supremacism, and other right-wing ideologies in a hierarchical structure paired with conspiratorial rhetoric alongside traditionalist and reactionary aspirations. The term was first used by social scientists in the 1950s regarding small groups such as the John Birch Society in the United States and since then it has been applied to similar groups worldwide. The term “radical” was applied to the groups because they sought to make fundamental (hence “radical”) changes within institutions and remove from political life persons and institutions that threatened their values or economic interests.

The study of the radical right began in the 1950s as social scientists attempted to explain McCarthyism, which was seen as a lapse from the American political tradition. A framework for description was developed primarily in Richard Hofstadter’s “The pseudo-conservative revolt” and Seymour Martin Lipset’s “The sources of the radical right”. These essays, along with others by Daniel Bell, Talcott Parsons, Peter Viereck and Herbert Hyman, were included in The New American Right (1955). In 1963, following the rise of the John Birch Society, the authors were asked to re-examine their earlier essays and the revised essays were published in the book The Radical Right. Lipset, along with Earl Raab, traced the history of the radical right in The politics of unreason (1970).

The central arguments of The Radical Right provoked criticism. Some on the Right thought that McCarthyism could be explained as a rational reaction to communism. Others thought McCarthyism should be explained as part of the Republican Party’s political strategy. Critics on the Left denied that McCarthyism could be interpreted as a mass movement and rejected the comparison with 19th-century populism. Others saw status politics, dispossession and other explanations as too vague.

White supremacy or white supremacism is the belief that white people are superior to those of other races and thus should dominate them. The belief favors the maintenance and defense of any power and privilege held by white people. White supremacy has roots in the now-discredited doctrine of scientific racism and was a key justification for European colonialism. It underlies a spectrum of contemporary movements including neo-Confederates, neo-Nazism and the so-called Christian Identity movement.

Different forms of white supremacy put forth different conceptions of who is considered white, though the exemplar is generally light-skinned, blond-haired, and blue-eyed—traits most common in northern Europe, which are pseudoscientifically viewed as being part of an Aryan race. Different groups of white supremacists identify various racial, ethnic and religious enemies, most commonly those of Sub-Saharan African ancestry, Indigenous peoples of the Americas and Oceania, Asians, multiracial people, Middle Eastern people, Jews, and Muslims.

As a political ideology, it imposes and maintains cultural, social, political, historical, and/or institutional domination by white people and non-white supporters. This ideology has been put into effect through socioeconomic and legal structures such as the Atlantic slave trade, Jim Crow laws in the United States, the White Australia policies from the 1890s to the mid-1970s, and apartheid in South Africa. In addition, this ideology is embodied in the “White power” social movement. Since the early 1980s, the White power movement has been committed to overthrowing the United States government and establishing a white ethnostate using paramilitary tactics.