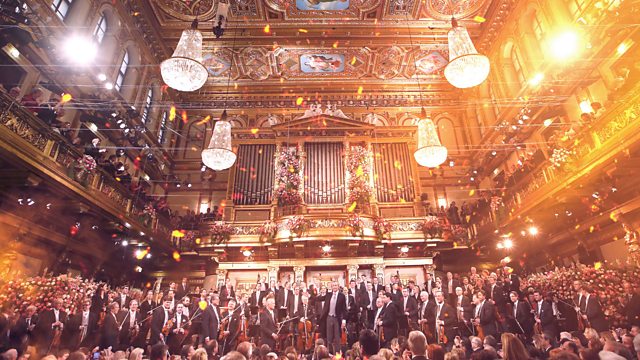 New Year’s Day Concert 2022: The Vienna Philharmonic Orchestra perform their traditional New Year’s Day concert. Petroc Trelawny hosts the traditional start to the year with a concert live from the golden hall of the Musikverein in Vienna. With a message of hope, friendship and peace, the VPO is directed by celebrated conductor Daniel Barenboim in an array of polkas, waltzes and gallops by the Strauss family and their contemporaries.

Furthermore, there are performances by the Vienna State Ballet in the rooms and grounds of Schonbrunn Palace, and an appearance by the world-famous Lipizzaner horses from the Spanish Riding School in Vienna, performing to the Nymph Polka by Josef Strauss. The concert ends with the ever-popular By the Beautiful Blue Danube and the foot-stamping Radetsky March.

The waltz The Blue Danube was not performed until 1945, and then as an encore. The Radetzky March was first performed in 1946, as an encore. Until 1958, these last two pieces were often but not always given as encores. Since that year, their position as twin encores has become inviolable tradition on New Year’s Day Concert 2021.

Daniel Barenboim is a pianist and conductor who is a citizen of Argentina, Israel, Palestine, and Spain. The current general music director of the Berlin State Opera and the Staatskapelle Berlin, Barenboim previously served as Music Director of the Chicago Symphony Orchestra, the Orchestre de Paris and La Scala in Milan. Barenboim is known for his work with the West–Eastern Divan Orchestra, a Seville-based orchestra of young Arab and Israeli musicians, and as a resolute critic of the Israeli occupation of Palestinian territories.

Barenboim has received many awards and prizes, including seven Grammy awards, an honorary Knight Commander of the Order of the British Empire, France’s Légion d’honneur both as a Commander and Grand Officier, and the German Großes Bundesverdienstkreuz mit Stern und Schulterband. In 2002, along with Palestinian-American scholar Edward Said, he was given Spain’s Prince of Asturias Concord Award. Barenboim is a polyglot, fluent in Spanish, Hebrew, English, French, Italian, and German. A self-described Spinozist, he is significantly influenced by Spinoza’s life and thought.

“Radetzky March”, Op. 228, is a piece of music composed by Johann Strauss Sr. and dedicated to Field Marshal Joseph Radetzky von Radetz. First performed on 31 August 1848 in Vienna, it soon became popular among regimented marching soldiers. It has been noted that its tone is more celebratory than martial; Strauss was commissioned to write the piece to commemorate Radetzky’s victory at the Battle of Custoza.

Along with the Blue Danube waltz by Johann Strauss Jr., the piece became an unofficial Austrian national anthem. In 1932 Joseph Roth published his novel Radetzky March, chronicling the decline and fall of the Austro-Hungarian Empire. Today, the theme is used in numerous promotional jingles and at major sporting events, in particular at football matches of the Austrian national team. Since 1896, the Radetzky has been the official presentation march of the Chilean Army’s Military School of the Liberator Bernardo O’Higgins. The 1st The Queen’s Dragoon Guards of the United Kingdom adopted the Radetzky March as its regimental quick march.

When it was first played in front of Austrian officers, they spontaneously clapped and stamped their feet when they heard the chorus. This tradition, with quiet rhythmic clapping on the first iteration of the melody, followed by thunderous clapping on the second, is often observed when the march is played in classical music venues in an orchestral version prepared by Leopold Weninger (1879–1940).

The Vienna Philharmonic, founded in 1842, is an orchestra considered to be one of the finest in the world.

The Vienna Philharmonic is based at the Musikverein in Vienna, Austria. Its members are selected from the orchestra of the Vienna State Opera. Selection involves a lengthy process, with each musician demonstrating their capability for a minimum of three years’ performance for the opera and ballet. After this probationary period, the musician may request an application for a position in the orchestra from the Vienna Philharmonic’s board.

In 2006, the Vienna Philharmonic was chosen as Europe’s finest orchestra in a survey of seven leading trade publications, two radio stations and a daily newspaper. In 2008, an international jury of music critics polled by the British Gramophone magazine ranked it third in the world (after the Royal Concertgebouw Orchestra and Berlin Philharmonic).

Subscription ticket demand for the Vienna Philharmonic at their home, Musikverein, is currently listed on the orchestra’s website as being subject to a waiting list—six years for weekday concert subscriptions, and thirteen years for weekend subscriptions. Casual tickets however, are available in small numbers and can be bought via links from the official website, to various ticket resellers.