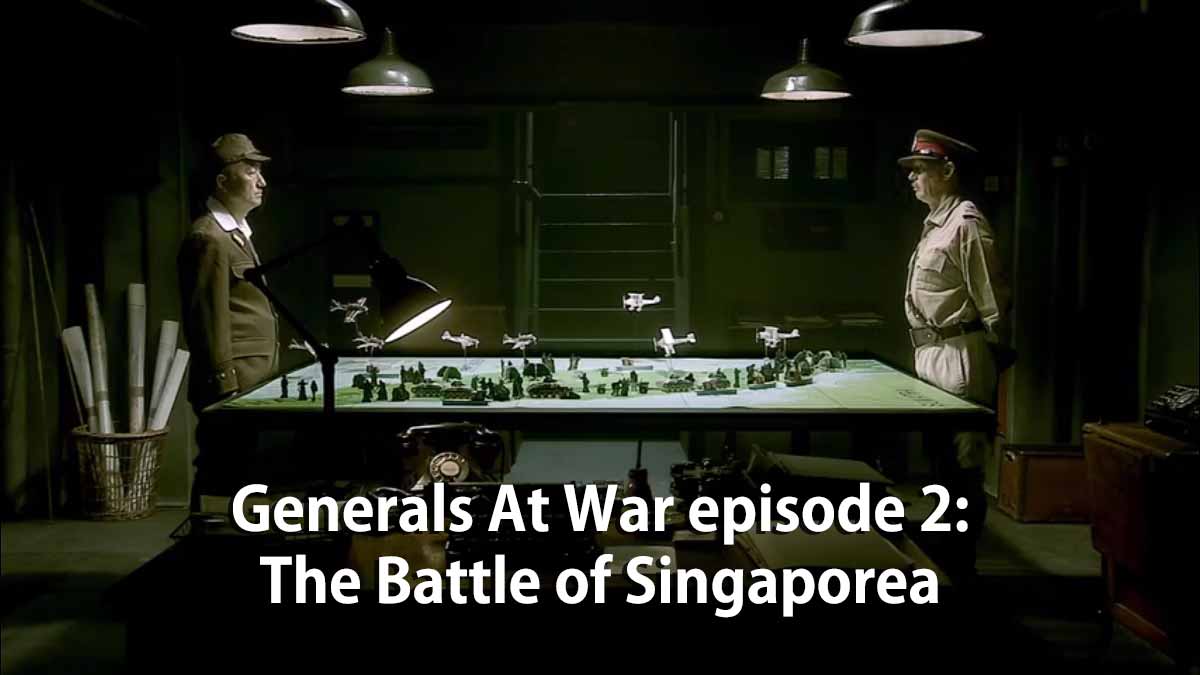 Generals At War episode 2 - The Battle of Singapore

Generals At War episode 2 – The Battle of Singapore: In 1941, the Gibraltar of the East was under attack by the Japanese. Despite the brave efforts of Lieutenant General Arthur Percival, Lieutenant General Tomoyuki Yamashita oversees the largest capitulation in British history.

The campaign, including the final battle, was a decisive Japanese victory, resulting in the Japanese capture of Singapore and the largest British surrender in history. About 80,000 British, Indian and Australian troops in Singapore became prisoners of war, joining 50,000 taken by the Japanese in the earlier Malayan Campaign. Famously, about 40,000 mostly Indian soldiers would join the Indian National Army and fight alongside the Japanese. British prime minister, Winston Churchill, called it the “worst disaster” in British military history.

During 1940 and 1941, the Allies had imposed a trade embargo on Japan in response to its continued campaigns in China and its occupation of French Indochina. The basic plan for taking Singapore was worked out in July 1940. Intelligence gained in late 1940 – early 1941 did not alter the basic plan, but confirmed it in the minds of Japanese decision makers.

On 11 November 1940, the German raider Atlantis captured the British steamer Automedon in the Indian Ocean, which was carrying papers meant for Air Marshal Sir Robert Brooke-Popham, the British commander in the Far East, which included much information about the weakness of the Singapore base.

In December 1940, the Germans handed over copies of the papers to the Japanese. The Japanese had broken the British Army’s codes and in January 1941, the Second Department (the intelligence-gathering arm) of the Imperial Army had interpreted and read a message from Singapore to London complaining in much detail about the weak state of “Fortress Singapore”, a message that was so frank in its admission of weakness that the Japanese at first suspected it was a British plant, believing that no officer would be so open in admitting weaknesses to his superiors, and only believed it was genuine after cross-checking the message with the Automedon papers.

Invasion of Malaya – The Battle of Singapore

The Japanese 25th Army invaded from Indochina, moving into northern Malaya and Thailand by amphibious assault on 8 December 1941. This was virtually simultaneous with the Japanese attack on Pearl Harbor which precipitated the United States entry into the war. Thailand initially resisted, but soon had to yield. The Japanese then proceeded overland across the Thai–Malayan border to attack Malaya. At this time, the Japanese began bombing strategic sites in Singapore.

Japanese breakthrough – The Battle of Singapore

The opening at Kranji made it possible for Imperial Guards armoured units to land there unopposed, after which they were able to begin ferrying across their artillery and armour. After finding his left flank exposed by the 27th Brigade’s withdrawal, the commander of the 11th Indian Infantry Division, Key, dispatched his reserve brigade, the 8th, to retake the high ground to the south of the Causeway.

Throughout the 10th, further fighting took place around along the Jurong Line, as orders were formulated to establish a secondary defensive line to the west of the Reformatory Road with troops not then employed in the Jurong Line; misinterpretation of these orders resulted in Taylor, the commander of the 22nd Brigade, prematurely withdrawing his troops to the east, where they were joined by a 200-strong ad hoc battalion of Australian reinforcements, known as ‘X’ Battalion.

The Jurong Line eventually collapsed, though, after the 12th Indian Brigade was withdrawn by its commander, Brigadier Archie Paris, to the road junction near Bukit Panjang, after he lost contact with the 27th Brigade on his right; the commander of the 44th Indian Brigade, Ballantine, commanding the extreme left of the line, also misinterpreted the orders in the same manner that Taylor had and withdrew.

Title
Generals At War episode 2 - The Battle of Singapore
Description

Generals At War episode 2 - The Battle of Singapore: In 1941, the Gibraltar of the East was under attack by the Japanese.