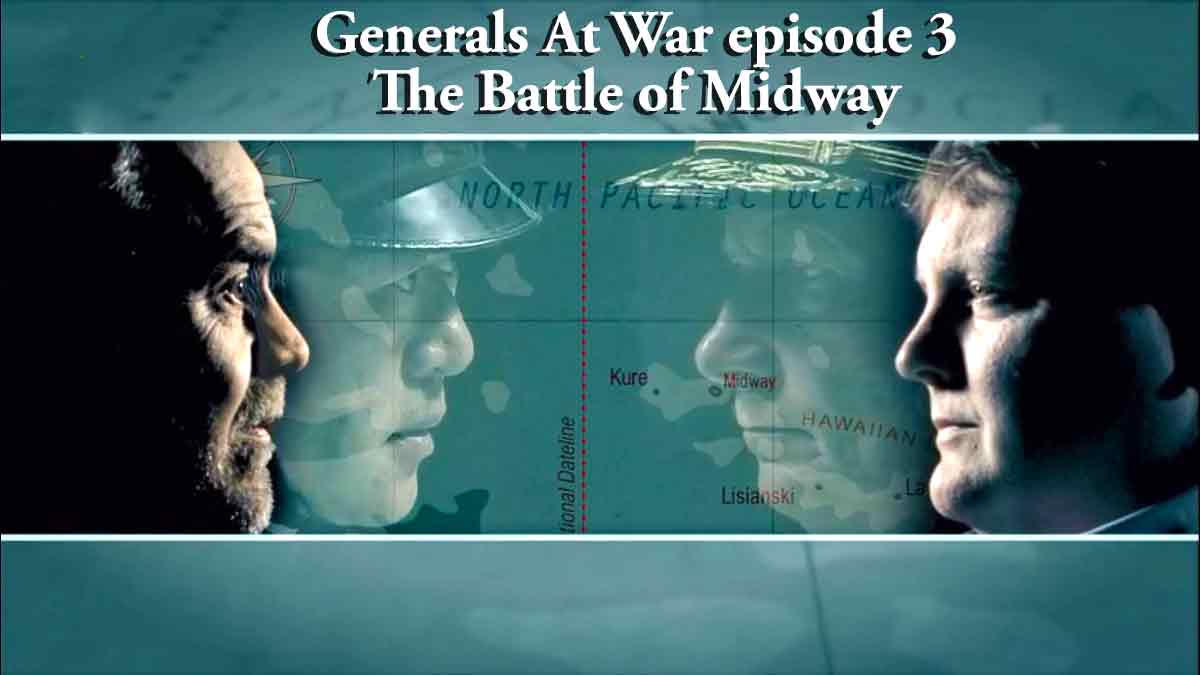 Generals At War episode 3 - The Battle of Midway

Generals At War episode 3 – The Battle of Midway: Considered the most important battle in the pacific during WW2, an examination of the battle tactics of Japanese Adm. Chuichi Nagumo and U.S. Adm. Jack Fletcher. A look at Japan’s little mistakes cost them the battle, and how the US forces nearly lost the battle.

The Battle of Midway was a significant naval battle in the Pacific Theater of World War II that took place on 4–7 June 1942, six months after Japan’s attack on Pearl Harbor and one month after the Battle of the Coral Sea. The U.S. Navy under Admirals Chester W. Nimitz, Frank J. Fletcher, and Raymond A.

Spruance defeated an attacking fleet of the Imperial Japanese Navy under Admirals Isoroku Yamamoto, Chūichi Nagumo, and Nobutake Kondō near Midway Atoll, inflicting devastating damage on the Japanese fleet that rendered their ships irreparable. Military historian John Keegan called it “the most stunning and decisive blow in the history of naval warfare”, while naval historian Craig Symonds called it “one of the most consequential naval engagements in world history, ranking alongside Salamis, Trafalgar, and Tsushima Strait, as both tactically decisive and strategically influential”.

At about 09:00 on 3 June, Ensign Jack Reid, piloting a PBY from U.S. Navy patrol squadron VP-44, spotted the Japanese Occupation Force 500 nautical miles (580 miles; 930 kilometers) to the west-southwest of Midway. He mistakenly reported this group as the Main Force.

Under heavy anti-aircraft fire, they dropped their bombs. Although their crews reported hitting four ships, none of the bombs actually hit anything and no significant damage was inflicted. Early the following morning, the Japanese oil tanker Akebono Maru sustained the first hit when a torpedo from an attacking PBY struck her around 01:00. This was the only successful air-launched torpedo attack by the U.S. during the entire battle.

At 04:30 on 4 June, Nagumo launched his initial attack on Midway itself, consisting of 36 Aichi D3A dive bombers and 36 Nakajima B5N torpedo bombers, escorted by 36 Mitsubishi A6M Zero fighters. At the same time, he launched his eight search aircraft (one from the heavy cruiser Tone launched 30 minutes late). Japanese reconnaissance arrangements were flimsy, with too few aircraft to adequately cover the assigned search areas, laboring under poor weather conditions to the northeast and east of the task force. As Nagumo’s bombers and fighters were taking off, 11 PBYs were leaving Midway to run their search patterns. At 05:34, a PBY reported sighting two Japanese carriers and another spotted the inbound airstrike 10 minutes later.

Chūichi Nagumo (25 March 1887 – 6 July 1944) was a Japanese admiral in the Imperial Japanese Navy (IJN) during World War II. Nagumo led Japan’s main carrier battle group, the Kido Butai, in the attack on Pearl Harbor, the Indian Ocean raid and the Battle of Midway. He committed suicide during the Battle of Saipan.

On 10 April 1941, Nagumo was appointed commander-in-chief of the First Air Fleet, the IJN′s main carrier battle group, largely due to his seniority. Many contemporaries and historians have doubted his suitability for this command, given his lack of familiarity with naval aviation.

By this time, he had visibly aged, physically and mentally. Physically, he suffered from arthritis, perhaps from his younger days as a kendoka. Mentally, he had become a cautious officer who carefully worked over the tactical plans of every operation he was involved in.

Admiral Nishizo Tsukahara had doubts about Nagumo’s appointment, and commented, “Nagumo was an officer of the old school, a specialist of torpedo and surface maneuvers…. He did not have any idea of the capability and potential of naval aviation.” One son of Nagumo described him as a brooding father, obsessed with and later regretful about pressuring his sons into the IJN. In contrast, Nagumo’s junior naval officers thought of him as a father figure.

Despite his limited experience, he was a strong advocate of combining sea and air power, although he was opposed to Admiral Isoroku Yamamoto’s plan to attack the United States Navy Naval Station Pearl Harbor. While commanding the First Air Fleet, Nagumo oversaw the attack on Pearl Harbor, but he was later criticized for his failure to launch a third attack, which might have destroyed the fuel oil storage and repair facilities. This could have rendered the most important U.S. naval base in the Pacific useless, especially as the use of the submarine base and intelligence station at the installation were critical factors in Japan’s defeat in the Pacific War.

Frank Jack Fletcher (April 29, 1885 – April 25, 1973) was an admiral in the United States Navy during World War II. Fletcher was the operational commander at the pivotal Battles of Coral Sea and of The Battle of Midway. As a lieutenant, Fletcher was awarded the Medal of Honor for his actions in battle at Veracruz. He was the nephew of Admiral Frank Friday Fletcher, who was also awarded the Medal of Honor for actions at Veracruz.

In June 1942, Fletcher was the officer in tactical command at the battle of Midway with two task forces, his usual Task Force 17—with a quickly repaired Yorktown—plus Task Force 16, with Enterprise and Hornet. Vice Admiral William Halsey normally commanded this task force, but became ill and was replaced by Rear Admiral Raymond A. Spruance. When aircraft from four Japanese carriers attacked Midway Island, the three U.S. carriers—warned by broken Japanese codes and waiting in ambush—attacked and sank three enemy carriers – Akagi, Kaga, and Sōryū.

Enterprise and Hornet lost seventy aircraft. Japanese attacks on June 4 severely damaged Yorktown; repairs returned her to the battle until she was hopelessly disabled by a new round of attacks two hours later. Fletcher’s scouts found the fourth enemy carrier, the Hiryū, and Enterprise, with Yorktown planes, then sank it. At dusk Fletcher released Spruance to continue fighting with Task Force 16 the next day. During the next two days, Spruance found two damaged cruisers and sank one. The enemy transport and battle fleets got away.

A Japanese submarine, I-168, found the crippled Yorktown, under tow, on June 5, and sank her along with an adjacent destroyer, Hammann. Japan had had seven large carriers—six at the time of the Pearl Harbor attack and one new construction. Four were sunk at Midway. This did not win the war, but evened the odds between Japanese and American fleet carriers. Following the battle, Fletcher was promoted to vice admiral and continued to command a carrier group at sea, after shifting his flag to Saratoga.

Title
Generals At War episode 3 - The Battle of Midway
Description

Generals At War episode 3 - The Battle of Midway: Considered the most important battle in the pacific, an examination of the battle tactics