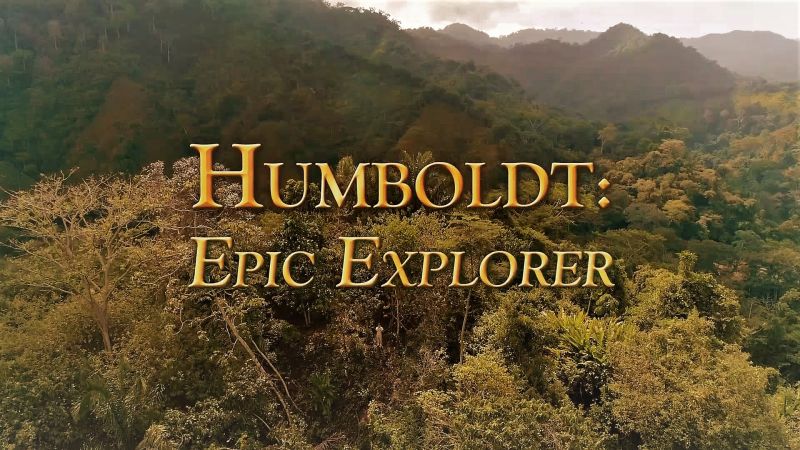 Humboldt – Epic Explorer: More than 200 years ago, a scientist named Alexander von Humboldt embarked on a perilous five-year journey through the Venezuelan jungles and Andean Mountains of South America.

At the time, it was believed that the world was less than 6,000 years old. He’s groundbreaking observations and theories would not only inspire Charles Darwin, but change our understanding of nature–and the role human’s plays in it–forever. Follow historian and best-selling author Andrea Wulf as she recounts his footsteps and discoveries.

Friedrich Wilhelm Heinrich Alexander von Humboldt (14 September 1769 – 6 May 1859) was a Prussian polymath, geographer, naturalist, explorer, and proponent of Romantic philosophy and science. He was the younger brother of the Prussian minister, philosopher, and linguist Wilhelm von Humboldt (1767–1835). He’s quantitative work on botanical geography laid the foundation for the field of biogeography. Humboldt’s advocacy of long-term systematic geophysical measurement laid the foundation for modern geomagnetic and meteorological monitoring.

Between 1799 and 1804, Humboldt travelled extensively in the Americas, exploring and describing them for the first time from a modern scientific point of view. His description of the journey was written up and published in several volumes over 21 years. He was one of the first people to propose that the lands bordering the Atlantic Ocean were once joined (South America and Africa in particular).

He resurrected the use of the word cosmos from the ancient Greek and assigned it to his multivolume treatise, Kosmos, in which he sought to unify diverse branches of scientific knowledge and culture. This important work also motivated a holistic perception of the universe as one interacting entity. He was the first person to describe the phenomenon and cause of human-induced climate change, in 1800 and again in 1831, based on observations generated during his travels.

After their first stay in Cuba of three months, they returned to the mainland at Cartagena de Indias (now in Colombia), a major center of trade in northern South America. Ascending the swollen stream of the Magdalena River to Honda, they arrived in Bogotá on 6 July 1801, where they met the Spanish botanist José Celestino Mutis, head of the Royal Botanical Expedition to New Granada, staying there until 8 September 1801.

Mutis was generous with his time and gave Humboldt access to the huge pictorial record he had compiled since 1783. Mutis was based in Bogotá, but as with other Spanish expeditions, he had access to local knowledge and a workshop of artists, who created highly accurate and detailed images. This type of careful recording meant that even if specimens were not available to study at a distance, “because the images traveled, the botanists did not have to”. Humboldt was astounded at Mutis’s accomplishment; when Humboldt published his first volume on botany, he dedicated it to Mutis “as a simply mark of our admiration and acknowledgement”.

Humboldt had hopes of connecting with the French sailing expedition of Baudin, now finally underway, so Bonpland and Humboldt hurried to Ecuador. They crossed the frozen ridges of the Cordillera Real, they reached Quito on 6 January 1802, after a tedious and difficult journey.

Their stay in Ecuador was marked by the ascent of Pichincha and their climb of Chimborazo, where Humboldt and his party reached an altitude of 19,286 feet (5,878 m). This was a world record at the time, but 1000 feet short of the summit. Humboldt’s journey concluded with an expedition to the sources of the Amazon en route for Lima, Peru.

He kept a detailed diary of his sojourn to Spanish America, running some 4,000 pages, which he drew on directly for his multiple publications following the expedition. The leather-bound diaries themselves are now in Germany, having been returned from Russia to East Germany, where they were taken by the Red Army after World War II.

Following German reunification, the diaries were returned to a descendant of Humboldt. For a time, there was concern about their being sold, but that was averted. A government-funded project to digitize the Spanish American expedition as well as his later Russian expedition has been undertaken (2014–2017) by the University of Potsdam and the German State Library—Prussian Cultural Heritage Foundation.