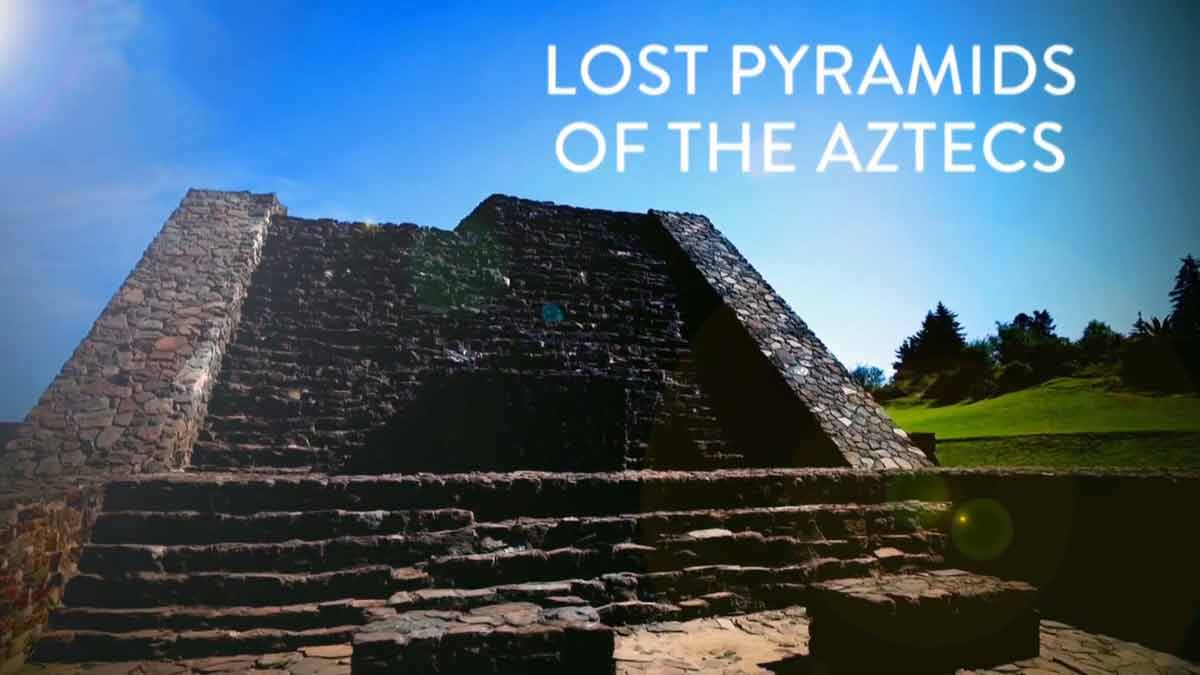 Lost Pyramids of the Aztecs

Lost Pyramids of the Aztecs: The Aztecs ruled one of the most powerful civilisations ever seen in the Americas. They were ruthless warriors and ingenious engineers, who conquered a huge territory and built towering pyramids and ambitious civil engineering projects using manpower alone.

Part 1: Secrets of the Ghost City – Lost Pyramids of the Aztecs

In this First episode, archaeologists begin a pioneering experiment to build a replica Aztec pyramid, investigate the mysterious pyramid ruins being unearthed in the heart of Mexico city and venture deep inside a set of hidden tunnels below a vast pyramid that had been lost for centuries.

Part 2: Pyramids of the Dead

In this Second episode, archaeologists investigate the extraordinary discovery of over 100 ancient skeletons buried in a hillside outside Mexico City, attempt to decode the secrets of a mysterious ancient manuscript to reveal the secrets of Aztec ritual sacrifice, and finally manage to complete their ground breaking experiment to build a replica Aztec pyramid.

But after just 200 years their vast empire was wiped out by Spanish invaders, and their cities and monuments were destroyed. Today many of the Aztecs’ secrets lie buried underneath Mexico City. Now archaeologists are digging deeper than ever before to find out who the Aztecs were and how they built their remarkable empire. Using stunning CGI imagery, unique access to ongoing new excavations, and a pioneering experiment to build a replica Aztec pyramid in the Mexican countryside, Lost Pyramids of the Aztecs is an immersive investigation into the vanished world of this fascinating civilisation.

Lost Pyramids of the Aztecs

The Aztec Empire, or the Triple Alliance, was an alliance of three Nahua altepetl city-states: Mexico-Tenochtitlan, Texcoco, and Tlacopan. These three city-states ruled the area in and around the Valley of Mexico from 1428 until the combined forces of the Spanish conquistadores and their native allies under Hernán Cortés defeated them in 1521.

The Triple Alliance was formed from the victorious factions of a civil war fought between the city of Azcapotzalco and its former tributary provinces. Despite the initial conception of the empire as an alliance of three self-governed city-states, Tenochtitlan quickly became dominant militarily. By the time the Spanish arrived in 1519, the lands of the Alliance were effectively ruled from Tenochtitlan, while the other partners in the alliance had taken subsidiary roles.

The alliance waged wars of conquest and expanded rapidly after its formation. At its height, the alliance controlled most of central Mexico as well as some more distant territories within Mesoamerica, such as the Xoconochco province, an Aztec exclave near the present-day Guatemalan border. Aztec rule has been described by scholars as “hegemonic” or “indirect”.

The Aztecs left rulers of conquered cities in power so long as they agreed to pay semi-annual tribute to the Alliance, as well as supply military forces when needed for the Aztec war efforts. In return, the imperial authority offered protection and political stability, and facilitated an integrated economic network of diverse lands and peoples who had significant local autonomy.

Nahua peoples descended from Chichimec peoples who migrated to central Mexico from the north in the early 13th century. The migration story of the Mexica is similar to those of other polities in central Mexico, with supernatural sites, individuals, and events, joining earthly and divine history as they sought political legitimacy.

According to the pictographic codices in which the Aztecs recorded their history, the place of origin was called Aztlán. Early migrants settled the Basin of Mexico and surrounding lands by establishing a series of independent city-states. These early Nahua city-states or altepetl, were ruled by dynastic heads called tlahtohqueh (singular, tlatoāni). Most of the existing settlements had been established by other indigenous peoples before the Mexica migration.

These early city-states fought various small-scale wars with each other, but due to shifting alliances, no individual city gained dominance. The Mexica were the last of the Nahua migrants to arrive in Central Mexico. They entered the Basin of Mexico around the year 1250, and by then most of the good agricultural land had already been claimed. The Mexica persuaded the king of Culhuacan, a small city-state but important historically as a refuge of the Toltecs, to allow them to settle in a relatively infertile patch of land called Chapultepec (Chapoltepēc, “in the hill of grasshoppers”). The Mexica served as mercenaries for Culhuacan.

Spanish expedition leader Hernán Cortés landed in Yucatán in 1519 with approximately 630 men (most armed with only a sword and shield). Cortés had actually been removed as the expedition’s commander by the governor of Cuba, Diego Velásquez, but had stolen the boats and left without permission. At the island of Cozumel, Cortés encountered a shipwrecked Spaniard named Gerónimo de Aguilar who joined the expedition and translated between Spanish and Mayan.

The expedition then sailed west to Campeche, where after a brief battle with the local army, Cortés was able to negotiate peace through his interpreter, Aguilar. The King of Campeche gave Cortés a second translator, a bilingual Nahua-Maya slave woman named La Malinche (she was known also as Malinalli, Malintzin or Doña Marina. Aguilar translated from Spanish to Mayan and La Malinche translated from Mayan to Nahuatl. Once Malinche learned Spanish, she became Cortés’s translator for both language and culture, and was a key figure in interactions with Nahua rulers. An important article, “Rethinking Malinche” by Frances Karttunen examines her role in the conquest and beyond.

Cortés then sailed from Campeche to Cempoala, a tributary province of the Aztec Triple Alliance. Nearby, he founded the town of Veracruz where he met with ambassadors from the reigning Mexica emperor, Motecuzoma II. When the ambassadors returned to Tenochtitlan, Cortés went to Cempoala to meet with the local Totonac leaders.

After the Totonac ruler told Cortés of his various grievances against the Mexica, Cortés convinced the Totonacs to imprison an imperial tribute collector. Cortés subsequently released the tribute collector after persuading him that the move was entirely the Totonac’s idea and that he had no knowledge of it. Having effectively declared war on the Aztecs, the Totonacs provided Cortés with 20 companies of soldiers for his march to Tlaxcala. At this time several of Cortés’s soldiers attempted to mutiny. When Cortés discovered the plot, he had his ships scuttled and sank them in the harbor to remove any possibility of escaping to Cuba.

Lost Pyramids of the Aztecs: The Aztecs ruled one of the most powerful civilisations ever seen in the Americas.

Tags: Aztecs, Lost Pyramids, Pyramids of the Dead, Secrets of the Ghost City