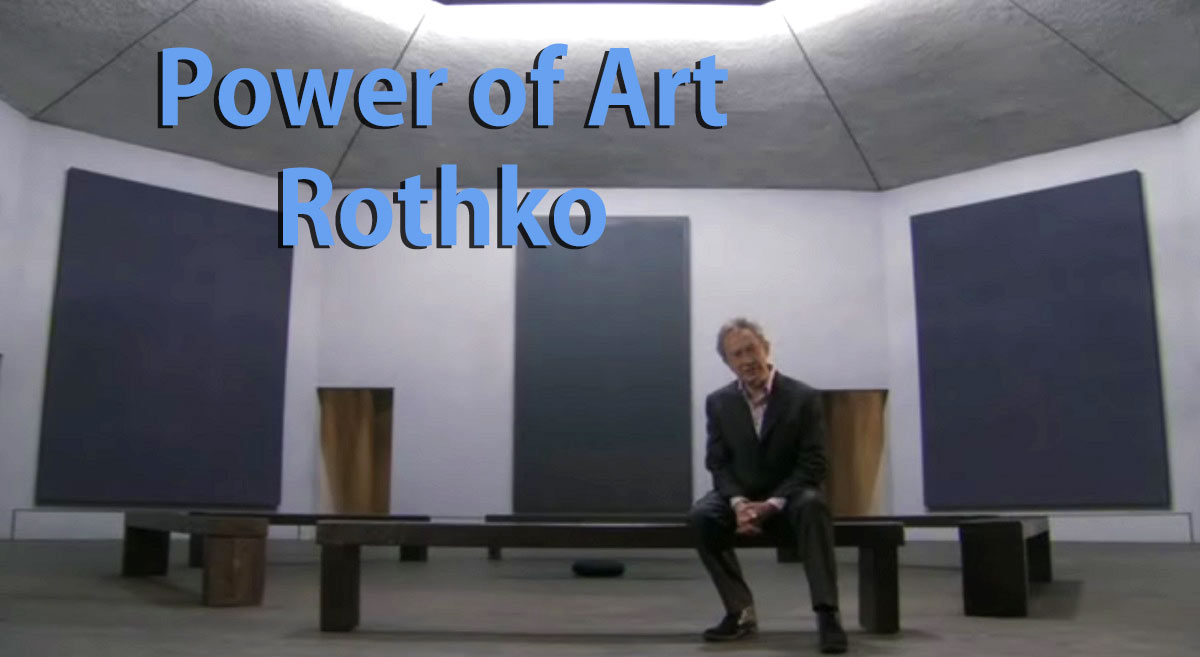 Power of Art – Rothko episode 8: Rothko is known for his abstract expressionism paintings, but he moved through more traditional styles in his early career, including Surrealist paintings in the 1940s. In 1947 he embarked on the first of his large abstract ‘colour-field’ paintings, formalising their structure further in the 1950s. Rothko had huge success with largescale solo shows, but committed suicide in 1970.

Mark Rothko, born Markus Yakovlevich Rothkowitz, was an American painter of Latvian Jewish descent. He did not personally subscribe to any art movement, but he is generally identified as an abstract expressionist.

Mark Rothko was born in Daugavpils, Latvia (then in the Russian Empire). His father, Jacob (Yakov) Rothkowitz, was a pharmacist and intellectual who initially provided his children with a secular and political, rather than religious, upbringing. According to him, his Marxist father was “violently anti-religious”. In an environment where Jews were often blamed for many of the evils that befell Russia, Rothko’s early childhood was plagued by fear.

He’s move to New York landed him in a fertile artistic atmosphere. Modernist painters were having more shows in New York galleries all the time, and the city’s museums were an invaluable resource for a budding artist’s knowledge and skills. Among the important early influences on him were the works of the German Expressionists, the surrealist art of Paul Klee, and the paintings of Georges Rouault.

In 1928, with a group of other young artists, Rothko exhibited works at the Opportunity Gallery. His paintings, including dark, moody, expressionist interiors and urban scenes, were generally well accepted among critics and peers. To supplement his income, in 1929 Rothko began instructing schoolchildren in drawing, painting and clay sculpture at the Center Academy of the Brooklyn Jewish Center, where he would remain active in teaching at that location for twenty-two years, until 1952.

Rothko, Gottlieb, Newman, Solman, Graham, and their mentor, Avery, spent considerable time together, vacationing at Lake George, New York, and Gloucester, Massachusetts. In the daytime they painted, then discussed art in the evenings. During a 1932 visit to Lake George, Rothko met Edith Sachar, a jewelry designer, whom he married later that year. The following summer, his first one-person show was held at the Portland Art Museum, consisting mostly of drawings and aquarelles.

For this exhibition, he took the very unusual step of displaying works done by his pre-adolescent students from the Center Academy, alongside his own. His family was unable to understand Rothko’s decision to be an artist, especially considering the dire economic situation of the Depression. Having suffered serious financial setbacks, the Rothkowitzes were mystified by Rothko’s seeming indifference to financial necessity. They felt he was doing his mother a disservice by not finding a more lucrative and realistic career.

In 1936, Rothko began writing a book, never completed, about similarities in the art of children and the work of modern painters. According to him, the work of modernists, influenced by primitive art, could be compared to that of children in that “child art transforms itself into primitivism, which is only the child producing a mimicry of himself.”

In this manuscript, he observed: “Tradition of starting with drawing in academic notion We may start with color.” He was using fields of color in his aquarelles and city scenes. His style was already evolving in the direction of his renowned later works. Despite this newfound exploration of color, Rothko turned his attention to other formal and stylistic innovations, inaugurating a period of surrealist paintings influenced by mythological fables and symbols.

He’s work later matured from representation and mythological subjects into rectangular fields of color and light, culminating in his final works for the Rothko Chapel. Between his early style of primitivist and playful urban scenes, and his later style of transcendent color fields, was a long period of transition. This development was marked by two important events in Rothko’s life: the onset of World War II, and his reading of Friedrich Nietzsche.

Power of Art - Rothko episode 8: is known for his abstract expressionism paintings, but he moved through more traditional styles in his early career.