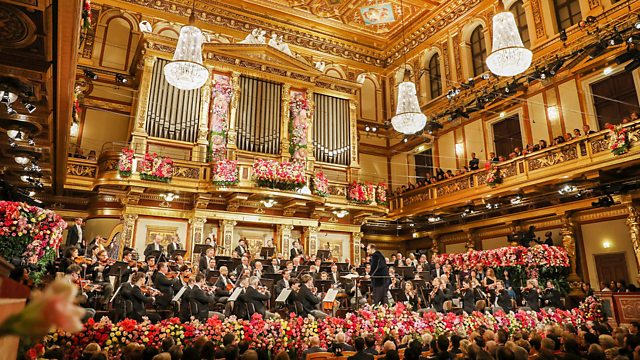 Petroc Trelawny hosts the Vienna Philharmonic’s annual New Year’s Day Concert from the Golden Hall of the Musikverein in Vienna. In these uncertain times, the concert looks to send people all over the world a new year’s greeting in the spirit of hope, friendship and peace.

Having enjoyed a 50-year musical partnership with the Vienna Philharmonic, Riccardo Muti takes charge of the celebrations for the sixth time in what’s bound to be a uniquely poignant occasion. The concert includes the traditional mix of Austrian classics, featuring music by the Strauss family and ending with the ever-popular By the Beautiful Blue Danube and the foot-stamping Radetzky March.

He currently holds two music directorships, at the Chicago Symphony Orchestra and at the Orchestra Giovanile Luigi Cherubini. He has previously held posts at the Maggio Musicale in Florence, the Philharmonia Orchestra in London, the Philadelphia Orchestra, the Teatro alla Scala in Milan, and the Salzburg Whitsun Festival. Muti has been a prolific recording artist, and has received dozens of honours, titles, awards and prizes. He is especially associated with the music of Giuseppe Verdi.

Muti has been a regular guest of the Berlin Philharmonic and the Vienna Philharmonic. In 1996 he conducted the latter during Vienna Festival Week and on tour to Japan, Korea, Hong Kong and Germany; he most recently toured with the Vienna Philharmonic to Japan in 2008. Muti has also led the orchestra’s globally televised Vienna New Year’s Concert on several occasions: in 1993, 1997, 2000, 2004, 2018, and 2021.

A special relationship connects Muti with the Salzburg Festival, where the conductor debuted in 1971 with Donizetti’s Don Pasquale (staged by Ladislav Stros). In the following years Muti has been constantly present at the festival, conducting both numerous concerts with the Vienna Philharmonic Orchestra and opera productions, such as Così fan tutte (staged by Michael Hampe) from 1982 to 1985 and from 1990 to 1991, La clemenza di Tito (staged by Peter Brenner) in 1988 and 1989, Don Giovanni (staged by Michael Hampe) in 1990 and 1991, La traviata (staged by Lluis Pasqual, and designed by Luciano Damiani) in 1995, The Magic Flute in 2005 (staged by Graham Vick) and 2006 (staged by Pierre Audi, stage designed by Karel Appel), Otello (staged by Stephen Langridge) in 2008, Moise et Pharaon (staged by Jürgen Flimm) in 2009, and Orfeo ed Euridice (staged by Dieter Dorn) in 2010. In 2011, Muti conducted a new production of Verdi’s Macbeth, which was directed by Peter Stein. For the 2017 Salzburg Festival, he conducted Aida, directed by Shirin Neshat. Muti also owns a residence close to Salzburg.

The waltz The Blue Danube was not performed until 1945, and then as an encore. The Radetzky March was first performed in 1946, as an encore. Until 1958, these last two pieces were often but not always given as encores. Since that year, their position as twin encores has become inviolable tradition on New Year’s Day Concert 2021