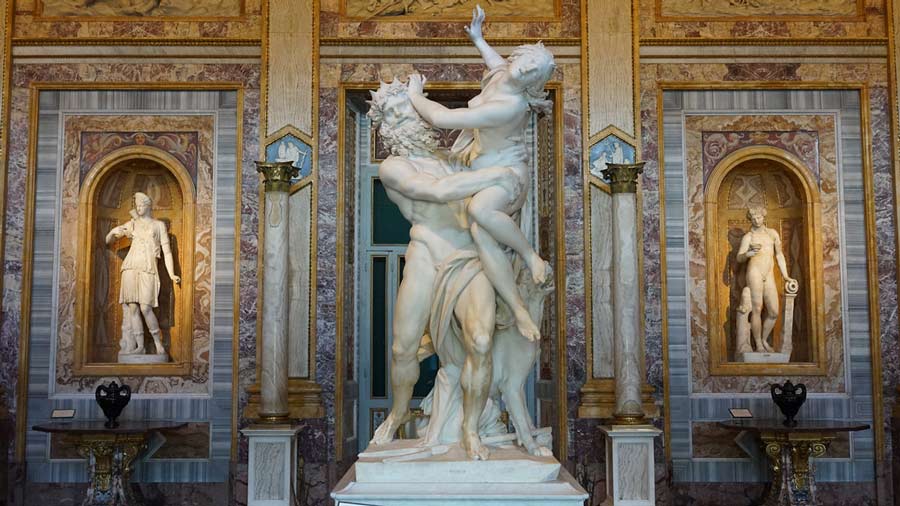 Bernini - The Rape of Proserpina

Power of Art – Bernini: Born in Naples, Bernini was an exceptional talent from an early age and went on to dominate the art world of 17th century Rome. His work epitomised the Baroque style and his sculpture, church interiors and exteriors and town planning could be seen everywhere.

Bernini worked under successive Popes; Pope Gregory XV made him a knight and Pope Urban VIII took him as his best friend. He was revered in his time until a jealous rage caused him to have the face of his mistress slashed after discovering her romance with his brother. His reputation fell further after his bell towers for the Cathedral of St Peter’s started cracking in 1641. He redeemed himself and kick started his career again with arguably his most famous work, The Ecstasy of St Theresa, in 1652.

Gian Lorenzo was an Italian sculptor and architect. While a major figure in the world of architecture, he was, also and even more prominently, the leading sculptor of his age, credited with creating the Baroque style of sculpture.

As one scholar has commented, “What Shakespeare is to drama, Bernini may be to sculpture: the first pan-European sculptor whose name is instantaneously identifiable with a particular manner and vision, and whose influence was inordinately powerful….” In addition, he was a painter (mostly small canvases in oil) and a man of the theater: he wrote, directed and acted in plays (mostly Carnival satires), for which he designed stage sets and theatrical machinery. He produced designs as well for a wide variety of decorative art objects including lamps, tables, mirrors, and even coaches.

Life and career of Bernini

Bernini was born in Naples in 1598 to Angelica Galante and Mannerist sculptor Pietro Bernini, originally from Florence. He was the sixth of their thirteen children. Gian Lorenzo Bernini was the definition of childhood genius. He was “recognized as a prodigy when he was only eight years old, [and] he was consistently encouraged by his father, Pietro. His precocity earned him the admiration and favor of powerful patrons who hailed him as ‘the Michelangelo of his century’”.

In 1606 his father received a papal commission (to contribute a marble relief in the Cappella Paolina of Santa Maria Maggiore) and so moved from Naples to Rome, taking his entire family with him and continuing in earnest the training of his son Gian Lorenzo. Several extant works, dating circa 1615–1620, are by general scholarly consensus, collaborative efforts by both father and son: they include the Faun Teased by Putti (c. 1615, Metropolitan Museum, NYC), Boy with a Dragon (c. 1616–17, Getty Museum, Los Angeles), the Aldobrandini Four Seasons (c. 1620, private collection), and the recently discovered Bust of the Savior (1615–16, New York, private collection).

Sometime after the arrival of the Bernini family in Rome, word about the great talent of the boy Gian Lorenzo got around and he soon caught the attention of Cardinal Scipione Borghese, nephew to the reigning pope, Paul V, who spoke of the boy genius to his uncle. Bernini was therefore presented before Pope Paul V, curious to see if the stories about Gian Lorenzo’s talent were true. The boy improvised a sketch of Saint Paul for the marveling pope, and this was the beginning of the pope’s attention on this young talent.

Bernini’s architectural works include sacred and secular buildings and sometimes their urban settings and interiors. He made adjustments to existing buildings and designed new constructions. Amongst his most well known works are the Piazza San Pietro (1656–67), the piazza and colonnades in front of St. Peter’s Basilica and the interior decoration of the Basilica.

The Ecstasy of Saint Teresa (alternatively Saint Teresa in Ecstasy or Transverberation of Saint Teresa; in Italian: L’Estasi di Santa Teresa or Santa Teresa in estasi) is the central sculptural group in white marble set in an elevated aedicule in the Cornaro Chapel, Santa Maria della Vittoria, Rome. It was designed and completed by Gian Lorenzo Bernini, the leading sculptor of his day, who also designed the setting of the Chapel in marble, stucco and paint. It is generally considered to be one of the sculptural masterpieces of the High Roman Baroque. It depicts Teresa of Ávila.

The entire ensemble was overseen and completed by a mature Bernini during the Pamphili papacy of Innocent X. When Innocent acceded to the papal throne, he shunned Bernini’s artistic services; the sculptor had been the favourite artist of the previous and profligate Barberini pope. Without papal patronage, the services of Bernini’s studio were therefore available to a patron such as the Venetian Cardinal Federico Cornaro (1579–1653).