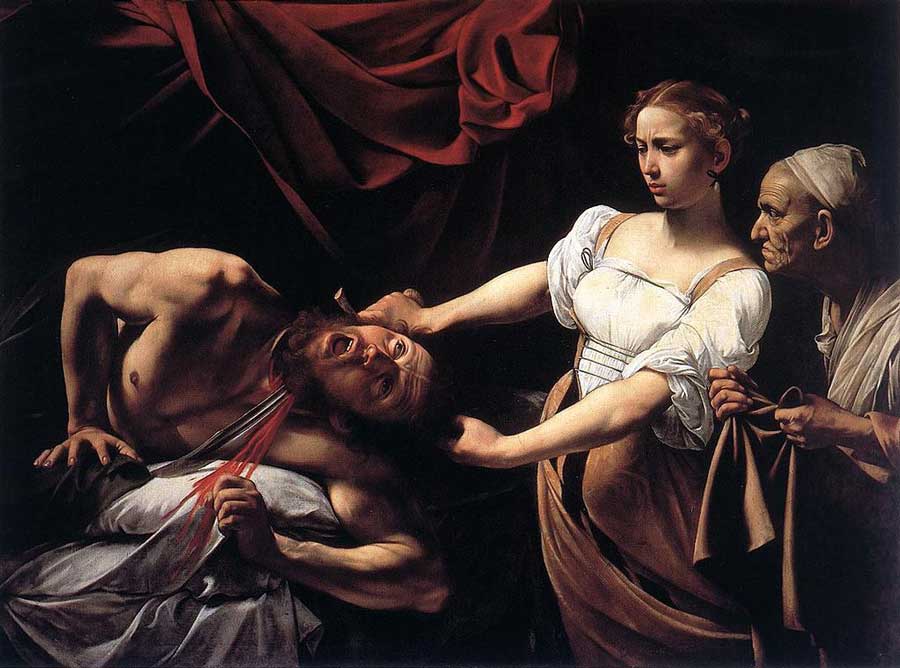 Power of Art – Caravaggio: Caravaggio’s approach to painting was unconventional. He avoided the standard method of making copies of old sculptures and instead took the more direct approach of painting directly onto canvas without drawing first. He also used people from the street as his models. His dramatic painting was enhanced with intense and theatrical lighting.

Caravaggio’s fate was sealed when in 1606 he killed a man in a duel. He fled to Naples where he attempted to paint his way out of trouble, he became a Knight, but was then imprisoned in Malta and then finally he moved to Sicily. He was pardoned for murder in 1610, but he died of a fever attempting to return to Rome.

It’s those hot spots in which great risks were taken that The Power of Art brings you. Instead of trying to reproduce the un-reproducible feeling you have when you are face to face with those works in the hush of the gallery or a church, the series (and the book) drops you instead into those difficult places and unforgiving dramas when the artists managed, against the odds, to astound. “Every artist thinks he’s Rembrandt”, Picasso once joked, but there would come a time when he thought so himself!

All the artists in our series – and some of the contemporary artists on our website who have joined in its spirit to reflect on them – have felt part of this craft of exhilarating trouble. I hope, when you watch the programmes, you too get to feel the heat.

Michelangelo Merisi was an Italian painter active in Rome for most of his artistic life. During the final four years of his life he moved between Naples, Malta, and Sicily until his death. His paintings combine a realistic observation of the human state, both physical and emotional, with a dramatic use of lighting, which had a formative influence on Baroque painting.

Caravaggio employed close physical observation with a dramatic use of chiaroscuro that came to be known as tenebrism. He made the technique a dominant stylistic element, darkening shadows and transfixing subjects in bright shafts of light. Caravaggio vividly expressed crucial moments and scenes, often featuring violent struggles, torture, and death. He worked rapidly, with live models, preferring to forgo drawings and work directly onto the canvas.

His influence on the new Baroque style that emerged from Mannerism was profound. It can be seen directly or indirectly in the work of Peter Paul Rubens, Jusepe de Ribera, Gian Lorenzo Bernini, and Rembrandt, and artists in the following generation heavily under his influence were called the “Caravaggisti” or “Caravagesques”, as well as tenebrists or tenebrosi (“shadowists”).

Legal Problems and Flight from Rome

Caravaggio led a tumultuous life. He was notorious for brawling, even in a time and place when such behavior was commonplace, and the transcripts of his police records and trial proceedings fill many pages. Bellori claims that around 1590–1592, Caravaggio, already well known for brawling with gangs of young men, committed a murder which forced him to flee from Milan, first to Venice and then to Rome.

On 28 November 1600, while living at the Palazzo Madama with his patron Cardinal Del Monte, Caravaggio beat nobleman Girolamo Stampa da Montepulciano, a guest of the cardinal, with a club, resulting in an official complaint to the police. Episodes of brawling, violence, and tumult grew more and more frequent. Caravaggio was often arrested and jailed at Tor di Nona.

Exile and death of Caravaggio

Caravaggio had a fever at the time of his death, and what killed him was a matter of controversy and rumor at the time, and has been a matter of historical debate and study since. Contemporary rumors held that either the Tommasoni family or the Knights had him killed in revenge. Traditionally historians have long thought he died of syphilis. Some have said he had malaria, or possibly brucellosis from unpasteurised dairy. Some scholars have argued that Caravaggio was actually attacked and killed by the same “enemies” that had been pursuing him since he fled Malta, possibly Wignacourt and/or factions of the Knights.

Human remains found in a church in Porto Ercole in 2010 are believed to almost certainly belong to Caravaggio. The findings come after a year-long investigation using DNA, carbon dating and other analyses. Initial tests suggested Caravaggio might have died of lead poisoning—paints used at the time contained high amounts of lead salts, and Caravaggio is known to have indulged in violent behavior, as caused by lead poisoning. Later research suggested he died as the result of a wound sustained in a brawl in Naples, specifically from sepsis.