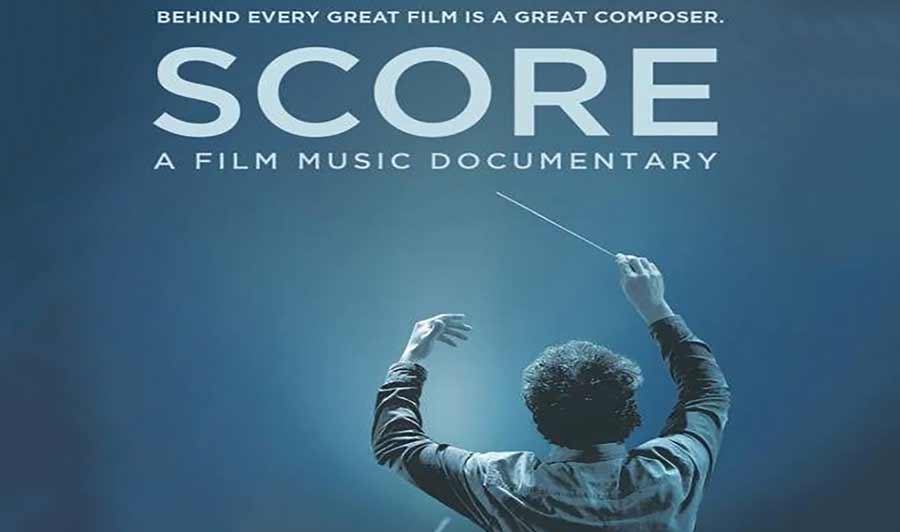 Matt Schrader’s first feature Score leads the slender field of documentaries about the work of film composers. Anyone whose interest runs deeper than humming the Darth Vader march will delight at the sheer who’s who lined up for this tantalising insight into an art form that leading light Hans Zimmer reminds us keeps the world’s studio orchestras in work, while director James Cameron refers to the score as a movie’s “heart and soul”.

With its Kong-to-Jaws potted history out of the way, Score luxuriates in footage of crack musicians at Abbey Road giving life to Duel of the Fates from The Phantom Menace and Patrick Doyle cheerfully bashing out his Potter Waltz from The Goblet of Fire on the piano. The notes of a motif from Lord of the Rings appear graphically on screen, but apart from that, it’s sheer indulgence for audio-cinephiles yearning to see Tom Holkenborg call up the drums from Mad Max: Fury Road and play them on his keyboard. Zimmer speaks for every insecure composer when he imagines panicking, “You’d better phone John Williams, I have no idea how to do this!”

Hans Florian Zimmer is a German film score composer and record producer. Zimmer’s works are notable for integrating electronic music sounds with traditional orchestral arrangements. Since the 1980s, he has composed music for over 150 films. His works include The Lion King, for which he won the Academy Award for Best Original Score in 1995, the Pirates of the Caribbean series, Interstellar, Gladiator, Crimson Tide, Inception, Dunkirk, Blade Runner 2049, and The Dark Knight Trilogy. He has received four Grammy Awards, three Classical BRIT Awards, two Golden Globes, and an Academy Award. He was also named on the list of Top 100 Living Geniuses, published by The Daily Telegraph.

Zimmer spent the early part of his career in the United Kingdom before moving to the United States. He is the head of the film music division at DreamWorks studios and works with other composers through the company that he founded, Remote Control Productions, formerly known as Media Ventures. His studio in Santa Monica, California has an extensive range of computer equipment and keyboards, allowing demo versions of film scores to be created quickly.

Daniel Robert Elfman is an American composer, singer, songwriter, record producer and actor. He first became well known as the singer-songwriter for the new wave band Oingo Boingo in the early 1980s, and has since garnered international recognition for composing over 100 feature film scores, as well as compositions for television, stage productions, and the concert hall.

Elfman has frequently worked with directors Tim Burton, Sam Raimi, and Gus Van Sant, with notable achievements including the scores for 16 Burton-directed films including Batman, Edward Scissorhands, Charlie and the Chocolate Factory, Alice in Wonderland, and Dumbo; Raimi’s Spider-Man, Spider-Man 2, and Oz the Great and Powerful; and Van Sant’s Academy Award-nominated films Good Will Hunting and Milk. He wrote music for all of the Men in Black and Fifty Shades of Grey franchise films, the songs and score for the Burton-produced animated musical The Nightmare Before Christmas, and the themes for the popular television series Desperate Housewives and The Simpsons.

John Towner Williams (born February 8, 1932) is an American composer, conductor, pianist and trombonist. Regarded by many as one of the greatest film composers of all time, he has composed some of the most popular, recognizable, and critically acclaimed film scores in cinematic history in a career that has spanned over six decades. Williams has won 25 Grammy Awards, seven British Academy Film Awards, five Academy Awards, and four Golden Globe Awards. With 52 Academy Award nominations, he is the second most-nominated individual, after Walt Disney. In 2005, the American Film Institute selected Williams’s score to 1977’s Star Wars as the greatest film score of all time. The Library of Congress also entered the Star Wars soundtrack into the National Recording Registry for being “culturally, historically, or aesthetically significant”.

Ennio Morricone was an Italian composer, orchestrator, conductor, and trumpet player who wrote music in a wide range of styles. With more than 400 scores for cinema and television, as well as more than 100 classical works, Morricone is widely considered as one of the most prolific and greatest film composers of all time.

His filmography includes more than 70 award-winning films, all Sergio Leone’s films since A Fistful of Dollars, all Giuseppe Tornatore’s films since Cinema Paradiso, The Battle of Algiers, Dario Argento’s Animal Trilogy, 1900, Exorcist II, Days of Heaven, several major films in French cinema, in particular the comedy trilogy La Cage aux Folles I, II, III and Le Professionnel, as well as The Thing, Once Upon a Time in America, The Mission, The Untouchables, Mission to Mars, Bugsy, Disclosure, In the Line of Fire, Bulworth, Ripley’s Game, and The Hateful Eight. His score to The Good, the Bad and the Ugly (1966) is regarded as one of the most recognizable and influential soundtracks in history. It was inducted into the Grammy Hall of Fame.

Quincy Delight Jones Jr. (born March 14, 1933) is an American record producer, multi-instrumentalist, songwriter, composer, arranger, and film and television producer. His career spans over 60 years in the entertainment industry with a record 80 Grammy Award nominations, 28 Grammys, and a Grammy Legend Award in 1992.