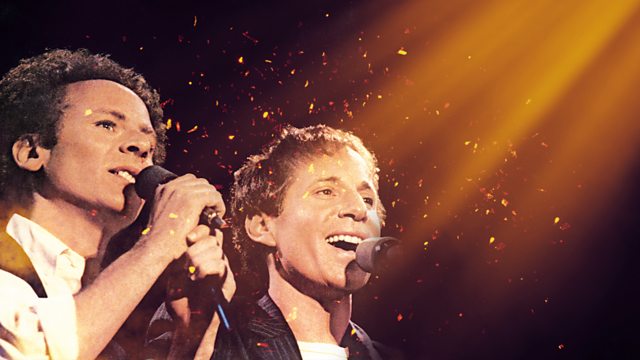 Simon & Garfunkel: The Harmony Game: At the end of a decade when the world was in crisis and inspiration needed resurrecting, an influential duo released a masterpiece of popular music, Bridge Over Troubled Water. Through darkness and light, the album takes its listeners on an emotional ride that echoes its era, and has proved to be a work that continues to inspire an audience the world over. Its symphonic hymn of a title track became an anthem for a generation.

This film tells the story behind what is widely considered Simon and Garfunkel’s greatest work. The influential duo’s last studio album has its legacy shrouded in rock’n’roll mythology, complete with legendary tales of inspiration, innovation and separation. Paul Simon, Art Garfunkel and their collaborators share the journey in their own words and reflect back on its impact 40 years later, using never-before-seen film, photos and memorabilia.

Simon & Garfunkel were an American folk-rock duo consisting of singer-songwriter Paul Simon and singer Art Garfunkel. They were one of the best-selling music groups of the 1960s, and their biggest hits—including “The Sound of Silence” (1965), “Mrs. Robinson” (1968), “The Boxer” (1969), and “Bridge over Troubled Water” (1970)—reached number one on singles charts worldwide.

Simon and Garfunkel met in elementary school in Queens, New York, in 1953, where they learned to harmonize together and began writing material. By 1957, under the name Tom & Jerry, the teenagers had their first minor success with “Hey Schoolgirl”, a song imitating their idols, the Everly Brothers. In 1963, aware of a growing public interest in folk music, they regrouped and were signed to Columbia Records as Simon & Garfunkel. Their debut, Wednesday Morning, 3 A.M., sold poorly, and they once again disbanded; Simon returned to a solo career, this time in England. In June 1965, a new version of “The Sound of Silence” overdubbed with electric guitar and drums became a major U.S. AM radio hit, reaching number one on the Billboard Hot 100. The duo reunited to release a second studio album, Sounds of Silence, and tour colleges nationwide. On their third release, Parsley, Sage, Rosemary and Thyme (1966), the duo assumed more creative control. Their music was featured in the 1967 film The Graduate, giving them further exposure. Their next album Bookends (1968) topped the Billboard 200 chart and included the number-one single “Mrs. Robinson” from the film.

The duo’s often rocky relationship led to artistic disagreements and their breakup in 1970. Their final studio album, Bridge over Troubled Water, was released in January of that year, becoming their most successful release and one of the world’s best-selling albums. After their breakup, Simon released a number of acclaimed albums, including 1986’s Graceland. Garfunkel released solo hits such as “All I Know” and briefly pursued an acting career, with leading roles in two Mike Nichols films, Catch-22 and Carnal Knowledge, and in Nicolas Roeg’s 1980 Bad Timing. The duo have reunited several times, most famously in 1981 for The Concert in Central Park, which attracted more than 500,000 people, one of the largest concert attendances in history.

Paul Frederic Simon (born October 13, 1941) is an American musician, singer, songwriter, actor and producer. Simon’s musical career has spanned over six decades. He is widely regarded as one of the most acclaimed songwriters in popular music history.

Simon formed the duo Simon & Garfunkel with his schoolfriend Art Garfunkel in 1956. They released five studio albums and became one of the most acclaimed groups of the 1960s. Simon composed nearly all of their songs, including “The Sound of Silence”, “Mrs. Robinson”, “America”, “Bridge over Troubled Water”, and “The Boxer”.

After Simon & Garfunkel split in 1970, Simon recorded three acclaimed albums over the following five years, all of which charted in the top 5 on the Billboard 200. His 1972 self-titled album contained the hit songs “Mother and Child Reunion” and “Me and Julio Down by the Schoolyard”. The 1975 album Still Crazy After All These Years, which featured guest vocals from Garfunkel, was his first number-one solo album, and featured the number 1 hit single “50 Ways to Leave Your Lover”, among other top-40 songs such as “Still Crazy After All These Years”, “Gone at Last”, and “My Little Town”.

Simon reunited with Garfunkel for a performance in New York Central Park in 1981, drawing half a million spectators, followed by a world tour with Garfunkel. After a career slump, Simon released Graceland, an album inspired by South African township music, which sold 14 million copies worldwide and remains his most popular and acclaimed solo work. A number of hit singles were released from the album, including “You Can Call Me Al”, “The Boy in the Bubble”, and “Diamonds on the Soles of Her Shoes”. It won the Grammy Award for Album of the Year in 1987.

Simon continued to tour throughout the 1990s, wrote a Broadway musical, The Capeman, and recorded a companion album, Songs from The Capeman which was released in 1997. His 2000 album You’re the One was nominated again for Album of the Year honors. He followed that album up with several years of touring, including another reunion tour with Garfunkel, and released Surprise, his last album of the decade, in 2006. In 2016 he released Stranger to Stranger, which debuted at number 3 on the Billboard Album Chart and number 1 the UK Albums Chart, and marked his greatest commercial and critical success in thirty years. His most recent album is 2018’s In the Blue Light, which contains re-arrangements of lesser-known songs from his prior albums.

Arthur Ira Garfunkel (born November 5, 1941) is an American singer, poet, and actor. He is best known for his partnership with Paul Simon in the folk rock duo Simon & Garfunkel.

Highlights of Garfunkel’s solo music career include one top-10 hit, three top-20 hits, six top-40 hits, 14 Adult Contemporary top-30 singles, five Adult Contemporary number ones, two UK number ones and a People’s Choice Award. Through his solo and collaborative work, Garfunkel has earned eight Grammys, including a Lifetime Achievement Award. In 1990, he and Simon were inducted into the Rock and Roll Hall of Fame. In 2008, Garfunkel was ranked 86th in Rolling Stone magazine’s list of the 100 Greatest Singers of All Time.

In 1963, Garfunkel and Simon (who graduated from Queens College before dropping out of Brooklyn Law School) reformed their duo under their own names as “Simon and Garfunkel”. They released their first album, Wednesday Morning, 3 A.M. on Columbia Records in October 1964. It was not a critical or commercial success, and the duo split. The next year, producer Tom Wilson lifted the song “The Sound of Silence” from the record, dubbed an electric backing onto it, and released it as a single that went to number one on the Billboard pop charts.

Simon had gone to the United Kingdom in 1965 after the initial failure of Wednesday Morning, 3 A.M., to pursue a solo career. He briefly teamed with songwriter Bruce Woodley of The Seekers. After “The Sound of Silence” had started to enjoy commercial success, he returned to the US to reunite with Garfunkel. The duo recorded four more influential albums: Sounds of Silence; Parsley, Sage, Rosemary and Thyme; Bookends; and the hugely successful Bridge over Troubled Water.

They contributed to the soundtrack of the 1967 Mike Nichols film The Graduate (starring Dustin Hoffman and Anne Bancroft). While writing “Mrs. Robinson”, Simon originally considered the title “Mrs. Roosevelt”. When Garfunkel reported this indecision over the song’s name to the director, Nichols replied, “Don’t be ridiculous! We’re making a movie here! It’s Mrs. Robinson!” Simon & Garfunkel traveled together to England in the fall of 1968. They made a concert appearance at Kraft Hall, which was broadcast on the BBC and featured Garfunkel’s solo performance of “For Emily, Whenever I May Find Her”. He received a standing ovation.

Simon & Garfunkel: The Harmony Game: At the end of a decade when the world was in crisis and inspiration needed resurrecting