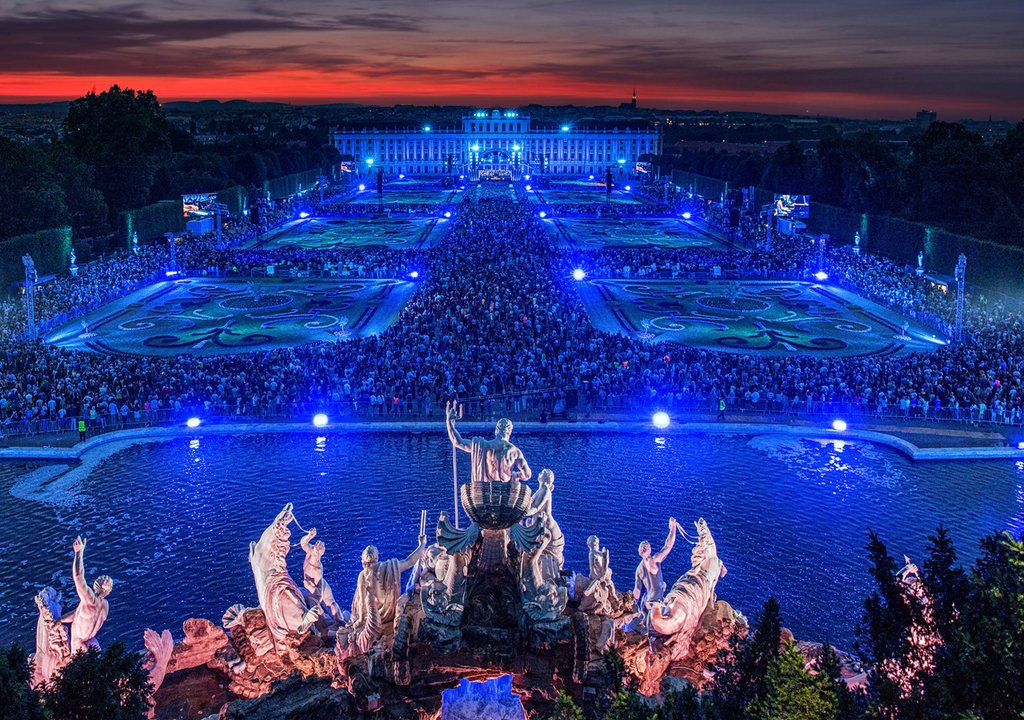 The orchestra podium and the audience area are located in the middle of the baroque park and are surrounded by the extraordinary scenery of Schönbrunn Palace and the Gloriette.

Harding was born in Oxford. He studied trumpet at Chetham’s School of Music and was a member of the National Youth Orchestra at age 13. At age 17, Harding assembled a group of musicians to perform Pierrot Lunaire of Arnold Schoenberg, and sent a tape of the performance to Simon Rattle in Birmingham. After listening to this tape, Rattle hired Harding as his assistant at the City of Birmingham Symphony Orchestra for a year, from 1993 to 1994. Harding then attended the University of Cambridge, but after his first year at university, Claudio Abbado named him his assistant with the Berlin Philharmonic Orchestra.

Harding first conducted the Berlin Philharmonic at age 21. At the time of his first conducting appearance at The Proms in 1996, he was then the youngest-ever conductor to appear there. Harding has stated that he has never had formal conducting lessons. He is a former Seiji Ozawa Fellow in conducting at Tanglewood Music Center.

In 1997, Harding was the Music Director of the Ojai Music Festival alongside pianist Emanuel Ax. Harding has been music director of the Trondheim Symphony Orchestra (1997–2000), the Deutsche Kammerphilharmonie Bremen (1999–2003) and the Mahler Chamber Orchestra (2003–2008). Harding now has the title of conductor laureate with the Mahler Chamber Orchestra. He conducted the 2005 opening night at La Scala, Milan in Idomeneo, as a substitute after the resignation of Riccardo Muti earlier in 2005.

Giuseppe Fortunino Francesco Verdi was an Italian opera composer. He was born near Busseto to a provincial family of moderate means, and developed a musical education with the help of a local patron. Verdi came to dominate the Italian opera scene after the era of Gioachino Rossini, Gaetano Donizetti, and Vincenzo Bellini, whose works significantly influenced him.

In his early operas, Verdi demonstrated a sympathy with the Risorgimento movement which sought the unification of Italy. He also participated briefly as an elected politician. The chorus “Va, pensiero” from his early opera Nabucco (1842), and similar choruses in later operas, were much in the spirit of the unification movement, and the composer himself became esteemed as a representative of these ideals.

An intensely private person, Verdi, however, did not seek to ingratiate himself with popular movements and as he became professionally successful was able to reduce his operatic workload and sought to establish himself as a landowner in his native region. He surprised the musical world by returning, after his success with the opera Aida (1871), with three late masterpieces: his Requiem (1874), and the operas Otello (1887) and Falstaff (1893).

Sergei Vasilyevich Rachmaninoff was a Russian composer, virtuoso pianist, and conductor of the late Romantic period. The influence of Tchaikovsky, Rimsky-Korsakov, Balakirev, Mussorgsky, and other Russian composers is seen in his early works, later giving way to a personal style notable for song-like melodicism, expressiveness and rich orchestral colours.

Born into a musical family, Rachmaninoff took up the piano at the age of four. He graduated from the Moscow Conservatory in 1892, having already composed several piano and orchestral pieces. In 1897, following the negative critical reaction to his Symphony No. 1, Rachmaninoff entered a four-year depression and composed little until successful supportive therapy allowed him to complete his enthusiastically received Piano Concerto No. 2 in 1901.

In the course of the next sixteen years, Rachmaninoff conducted at the Bolshoi Theatre, relocated to Dresden, Germany, and toured the United States for the first time. Rachmaninoff often featured the piano in his compositions, and he explored the expressive possibilities of the instrument through his own skills as a pianist.

Jean Sibelius; born Johan Julius Christian Sibelius, was a Finnish composer and violinist of the late Romantic and early-modern periods. He is widely recognized as his country’s greatest composer, and his music is often credited with having helped Finland develop a national identity during its struggle for independence from Russia.

The core of his oeuvre is his set of seven symphonies, which, like his other major works, are regularly performed and recorded in Finland and very many other countries. His other best-known compositions are Finlandia, the Karelia Suite, Valse triste, the Violin Concerto, the choral symphony Kullervo, and The Swan of Tuonela (from the Lemminkäinen Suite). Other well known works include pieces inspired by nature, Nordic mythology, and the Finnish national epic, the Kalevala, over a hundred songs for voice and piano, incidental music for numerous plays, the opera Jungfrun i tornet (The Maiden in the Tower), chamber music, piano music, Masonic ritual music, and 21 publications of choral music.

Sibelius composed prolifically until the mid-1920s, but after completing his Seventh Symphony (1924), the incidental music for The Tempest (1926) and the tone poem Tapiola (1926), he stopped producing major works in his last thirty years, a stunning and perplexing decline commonly referred to as the “silence of Järvenpää”, the location of his home. Although he is reputed to have stopped composing, he attempted to continue writing, including abortive efforts on an eighth symphony. In later life, he wrote Masonic music and re-edited some earlier works, while retaining an active but not always favourable interest in new developments in music.

Claude Debussy was a French composer. He is sometimes seen as the first Impressionist composer, although he vigorously rejected the term. He was among the most influential composers of the late 19th and early 20th centuries.

Born to a family of modest means and little cultural involvement, Debussy showed enough musical talent to be admitted at the age of ten to France’s leading music college, the Conservatoire de Paris. He originally studied the piano, but found his vocation in innovative composition, despite the disapproval of the Conservatoire’s conservative professors. He took many years to develop his mature style, and was nearly 40 when he achieved international fame in 1902 with the only opera he completed, Pelléas et Mélisande.

Debussy’s orchestral works include Prélude à l’après-midi d’un faune (1894), Nocturnes (1897–1899) and Images (1905–1912). His music was to a considerable extent a reaction against Wagner and the German musical tradition. He regarded the classical symphony as obsolete and sought an alternative in his “symphonic sketches”, La mer (1903–1905). His piano works include two books of Préludes and one of Études.

Throughout his career he wrote mélodies based on a wide variety of poetry, including his own. He was greatly influenced by the Symbolist poetic movement of the later 19th century. A small number of works, including the early La Damoiselle élue and the late Le Martyre de saint Sébastien have important parts for chorus. In his final years, he focused on chamber music, completing three of six planned sonatas for different combinations of instruments.

The Summer Night Concert in the beautiful setting of the Schönbrunn Palace is one of the great highlights of the Philharmonic year.