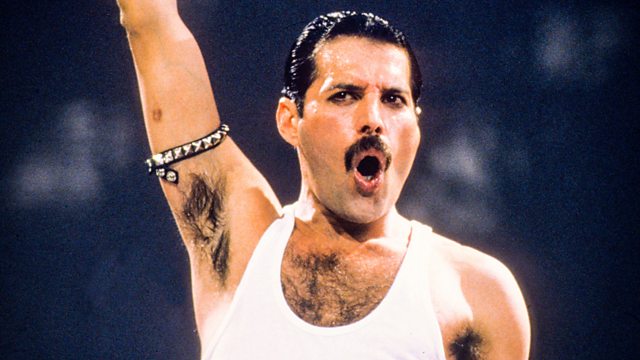 A Life in Ten Pictures – Freddie Mercury: Freddie Mercury’s image is known around the world. He was one of the most photographed men in history. But could just a handful of photos uncover new truths about someone we think we all know? This documentary throws a unique lens onto an extraordinary life, focusing on ten defining pictures – from iconic shots to private snaps – with their secrets revealed by those who were there and those who knew Freddie Mercury best.

Freddie Mercury (born Farrokh Bulsara; 5 September 1946 – 24 November 1991) was a British singer, songwriter, record producer, and lead vocalist of the rock band Queen. Regarded as one of the greatest singers in the history of rock music, he was known for his flamboyant stage persona and four-octave vocal range. Mercury defied the conventions of a rock frontman, with his highly theatrical style influencing the artistic direction of Queen.

Born in 1946 in Zanzibar to Parsi-Indian parents, he attended English-style boarding schools in India from the age of eight and returned to Zanzibar after secondary school. In 1964, his family fled the Zanzibar Revolution, moving to Middlesex, England. Having studied and written music for years, he formed Queen in 1970 with guitarist Brian May and drummer Roger Taylor. Mercury wrote numerous hits for Queen, including “Killer Queen”, “Bohemian Rhapsody”, “Somebody to Love”, “We Are the Champions”, “Don’t Stop Me Now”, and “Crazy Little Thing Called Love”. His charismatic stage performances often saw him interact with the audience, as displayed at the 1985 Live Aid concert. He also led a solo career and served as a producer and guest musician for other artists.

Mercury died in 1991 at age 45 due to complications from AIDS. He confirmed the day before his death that he had contracted the disease, having been diagnosed in 1987. Mercury had continued to record with Queen following his diagnosis, and he was posthumously featured on the band’s final album, Made in Heaven (1995). In 1992, his tribute concert was held at Wembley Stadium. His career with Queen was dramatised in the 2018 biopic Bohemian Rhapsody.

As a member of Queen, Mercury was posthumously inducted into the Rock and Roll Hall of Fame in 2001, the Songwriters Hall of Fame in 2003, and the UK Music Hall of Fame in 2004. In 1990, he and the other Queen members were awarded the Brit Award for Outstanding Contribution to British Music, and one year after his death Mercury was awarded it individually. In 2005, Queen were awarded an Ivor Novello Award for Outstanding Song Collection from the British Academy of Songwriters, Composers, and Authors. In 2002, Mercury ranked number 58 in the BBC’s poll of the 100 Greatest Britons.

Although Mercury’s speaking voice naturally fell in the baritone range, he delivered most songs in the tenor range. His known vocal range extended from bass low F (F2) to soprano high F (F6). He could belt up to tenor high F (F5). Biographer David Bret described his voice as “escalating within a few bars from a deep, throaty rock-growl to tender, vibrant tenor, then on to a high-pitched, perfect coloratura, pure and crystalline in the upper reaches.” Spanish soprano Montserrat Caballé, with whom Mercury recorded an album, expressed her opinion that “the difference between Freddie and almost all the other rock stars was that he was selling the voice”. She adds:

“His technique was astonishing. No problem of tempo, he sang with an incisive sense of rhythm, his vocal placement was very good and he was able to glide effortlessly from a register to another. He also had a great musicality. His phrasing was subtle, delicate and sweet or energetic and slamming. He was able to find the right colouring or expressive nuance for each word.”

The Who lead singer Roger Daltrey described Mercury as “the best virtuoso rock ‘n’ roll singer of all time. He could sing anything in any style. He could change his style from line to line and, God, that’s an art. And he was brilliant at it.” Discussing what type of person he wanted to play the lead role in his musical Jesus Christ Superstar, Andrew Lloyd Webber said: “He has to be of enormous charisma, but he also has to be a genuine, genuine rock tenor. That’s what it is. Really think Freddie Mercury, I mean that’s the kind of range we’re talking about.”

A research team undertook a study in 2016 to understand the appeal behind Mercury’s voice. Led by Professor Christian Herbst, the team identified his notably faster vibrato and use of subharmonics as unique characteristics of Mercury’s voice, particularly in comparison to opera singers. The research team studied vocal samples from 23 commercially available Queen recordings, his solo work, and a series of interviews of the late artist. They also used an endoscopic video camera to study a rock singer brought in to imitate Mercury’s singing voice