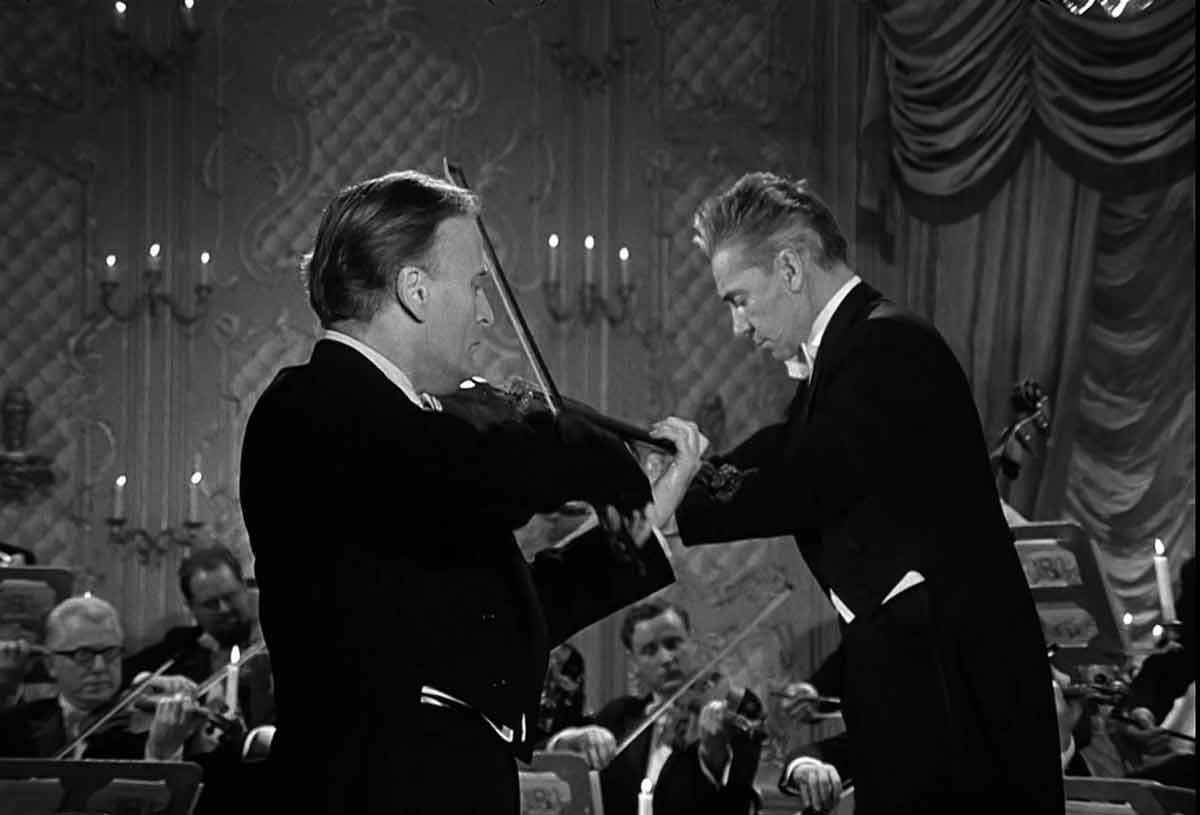 Both features, Mozart’s Violin Concerto No. 5 and Dvorak’s “New World” Symphony, were directed by master film-maker and long-time Karajan collaborator Henri-Georges Clouzot (“The Wages of Fear”).

Generally regarded as one of the greatest conductors of the 20th century, he was a controversial but dominant figure in European classical music from the mid-1950s until his death. Part of the reason for this was the large number of recordings he made and their prominence during his lifetime. By one estimate he was the top-selling classical music recording artist of all time, having sold an estimated 200 million records.

ehudi Menuhin was born in New York City to a family of Lithuanian Jews. Through his father Moshe, a former rabbinical student and anti-Zionist, he was descended from a distinguished rabbinical dynasty. In late 1919, Moshe and his wife Marutha (née Sher) became American citizens, and changed the family name from Mnuchin to Menuhin. Menuhin’s sisters were concert pianist and human rights activist Hephzibah, and pianist, painter and poet Yaltah.

Menuhin’s first violin instruction was at age four by Sigmund Anker (1891–1958); his parents had wanted Louis Persinger to teach him, but Persinger refused. Menuhin displayed exceptional musical talent at an early age. His first public appearance, when he was seven years old, was as solo violinist with the San Francisco Symphony Orchestra in 1923. Persinger then agreed to teach him and accompanied him on the piano for his first few solo recordings in 1928–29.

The Violin Concerto No. 5 in A major, K. 219, often referred to by the nickname The Turkish, was written by Wolfgang Amadeus Mozart in 1775, premiering during the Christmas season that year in Salzburg. It follows the typical fast-slow-fast musical structure.

Mozart composed the majority of his concertos for string instruments from 1773 to 1779, but it is unknown for whom, or for what occasion, he wrote them. Similarly, the dating of these works is unclear. Analysis of the handwriting, papers and watermarks has proved that all five violin concertos were re-dated several times. The year of composition of the fifth concerto “1775” was scratched out and replaced by “1780”, and later changed again to “1775”. Mozart would not use the key of A major for a concerto again until the Piano Concerto No. 12 (K. 414).

Wolfgang Amadeus Mozart, baptised as Johannes Chrysostomus Wolfgangus Theophilus Mozart, was a prolific and influential composer of the Classical period.

Born in Salzburg, in the Holy Roman Empire, Mozart showed prodigious ability from his earliest childhood. Already competent on keyboard and violin, he composed from the age of five and performed before European royalty. At 17, Mozart was engaged as a musician at the Salzburg court but grew restless and travelled in search of a better position. While visiting Vienna in 1781, he was dismissed from his Salzburg position. He chose to stay in Vienna, where he achieved fame but little financial security. During his final years in Vienna, he composed many of his best-known symphonies, concertos, and operas, and portions of the Requiem, which was largely unfinished at the time of his early death at the age of 35. The circumstances of his death have been much mythologized.

He composed more than 600 works, many of which are acknowledged as pinnacles of symphonic, concertante, chamber, operatic, and choral music. He is considered among the greatest classical composers of all time, and his influence on Western music is profound. Ludwig van Beethoven composed his early works in the shadow of Mozart, and Joseph Haydn wrote: “posterity will not see such a talent again in 100 years”.

Antonín Leopold Dvořák was a Czech composer, one of the first to achieve worldwide recognition. Following the Romantic-era nationalist example of his predecessor Bedřich Smetana, Dvořák frequently employed rhythms and other aspects of the folk music of Moravia and his native Bohemia. Dvořák’s own style has been described as “the fullest recreation of a national idiom with that of the symphonic tradition, absorbing folk influences and finding effective ways of using them”.

Dvořák displayed his musical gifts at an early age, being an apt violin student from age six. The first public performances of his works were in Prague in 1872 and, with special success, in 1873, when he was aged 31. Seeking recognition beyond the Prague area, he submitted a score of his First Symphony to a prize competition in Germany, but did not win, and the unreturned manuscript was lost until rediscovered many decades later. In 1874 he made a submission to the Austrian State Prize for Composition, including scores of two further symphonies and other works. Although Dvořák was not aware of it, Johannes Brahms was the leading member of the jury and was highly impressed.

The prize was awarded to Dvořák in 1874 and again in 1876 and in 1877, when Brahms and the prominent critic Eduard Hanslick, also a member of the jury, made themselves known to him. Brahms recommended Dvořák to his publisher, Simrock, who soon afterward commissioned what became the Slavonic Dances, Op. 46. These were highly praised by the Berlin music critic Louis Ehlert in 1878, the sheet music (of the original piano 4-hands version) had excellent sales, and Dvořák’s international reputation was launched at last.