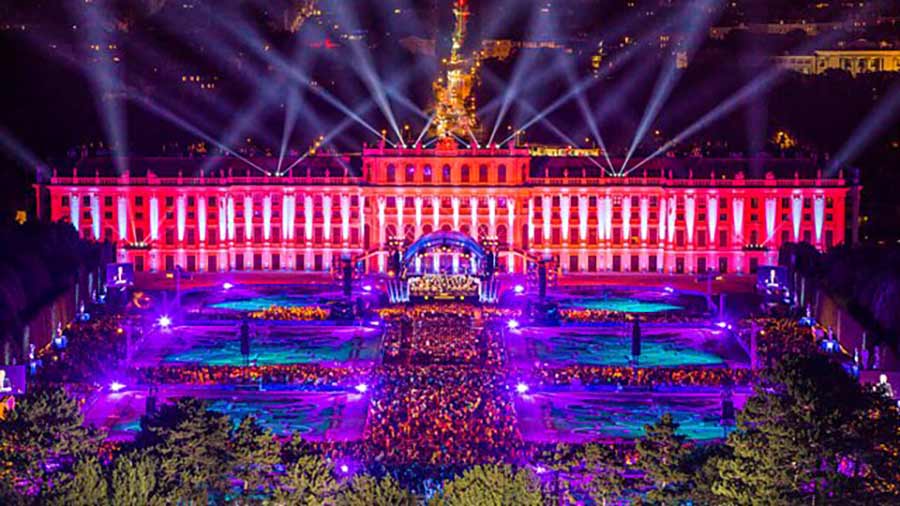 Summer Night Concert from Vienna 2020: The Vienna Philharmonic’s annual Summer Night Concert takes place in the unique ambience of the Schoenbrunn Palace Gardens in Vienna. Postponed from May, the 2020 concert is conducted by Russian maestro Valery Gergiev and features one of the world’s great operatic singers, German tenor Jonas Kaufmann.

Adopting the theme of love, the concert features arias by Jules Massenet, Emmerich Kalman and Giacomo Puccini. The Summer Night Concert is shown in more than 80 countries worldwide.

Sweeping melodies resonated from the magnificent gardens of the Schönbrunn Palace in Vienna, Austria, for this year’s ”love” themed Summer Night Concert. German operatic tenor, Jonas Kaufmann, enchanted at the open-air event, and spoke to Euronews about it in this week’s episode of Musica.

The program about “love” included selected works from areas of concert, film, ballet, opera and operetta, performed by the Vienna Philharmonic Orchestra, under the baton of Russian conductor Valery Gergiev. Tenor, Jonas Kaufmann spoke about the theme of the concert and why it was a perfect fit.

”Love is one of the greatest motivations for composing music. It has been like this for centuries, even millenniums, probably since the beginning of what we can perhaps call music. Music is about expressing something, about transporting feelings,” he explained.

Summer Night Concert Schönbrunn (German: Sommernachtskonzert) is an annual free entry outdoor concert in Vienna held by the Vienna Philharmonic. The venue for the concert is the Schönbrunn Palace. It has telecast on PBS in the United States as part of the series Great Performances. The concert began operations in 2004. Rolex began sponsoring it in 2009. As of around that year the concert has crowds of over 100,000.

In 1978, Gergiev became assistant conductor at the Kirov Opera, now the Mariinsky Opera, under Yuri Temirkanov, where he made his debut conducting Sergei Prokofiev’s War and Peace. He was chief conductor of the Armenian Philharmonic Orchestra from 1981 until 1985 – the year he made his debut in the United Kingdom, along with pianist Evgeny Kissin and violinists Maxim Vengerov and Vadim Repin at the Lichfield Festival.

In 1991, for the first time, Gergiev conducted a western European opera company with the Bavarian State Opera in a performance of Modest Mussorgsky’s Boris Godunov in Munich. In the same year, he made his American début, performing War and Peace with the San Francisco Opera. Since then, he has conducted both operatic and orchestral repertoire across the world. He also participates in numerous music festivals, including the White Nights in St. Petersburg.

Schönbrunn Palace was the main summer residence of the Habsburg rulers, located in Hietzing, Vienna. The name Schönbrunn (meaning “beautiful spring”) has its roots in an artesian well from which water was consumed by the court.

The 1,441-room Rococo palace is one of the most important architectural, cultural, and historic monuments in the country. The history of the palace and its vast gardens spans over 300 years, reflecting the changing tastes, interests, and aspirations of successive Habsburg monarchs. It has been a major tourist attraction since the mid-1950s.

Summer Night Concert from Vienna 2020: The Vienna Philharmonic’s annual concert takes place in the ambience of the Schoenbrunn Palace.