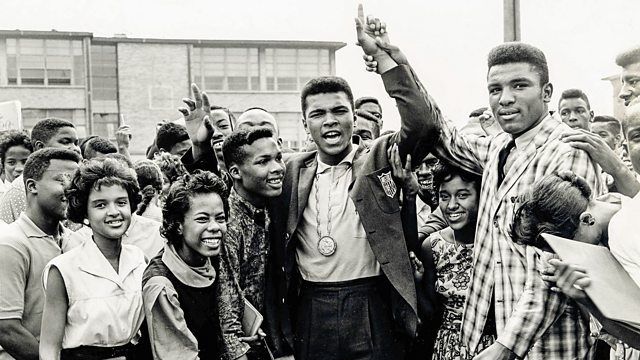 A Life in Ten Pictures – Muhammad Ali: Ali is one of the most photographed men in history. But can just a handful of photos uncover new truths about someone we think we know? This film throws a unique lens onto an extraordinary life, focusing on ten defining pictures, from iconic shots to private snaps, with their secrets revealed by those who were there and those who knew Ali best.

Muhammad Ali was an American professional boxer, activist, entertainer, poet, and philanthropist. Nicknamed The Greatest, he is widely regarded as one of the most significant and celebrated sporting figures of the 20th century, and is frequently ranked as the best heavyweight boxer and greatest athlete of the century.

Ali was born and raised in Louisville, Kentucky. He began training as an amateur boxer at age 12. At 18, he won a gold medal in the light heavyweight division at the 1960 Summer Olympics and turned professional later that year. He became a Muslim after 1961. He won the world heavyweight championship from Sonny Liston in a major upset on February 25, 1964, at age 22. On March 6, 1964, he announced that he no longer would be known as Cassius Clay but as Muhammad Ali. In 1966, Ali refused to be drafted into the military, citing his religious beliefs and ethical opposition to the Vietnam War.

He was found guilty of draft evasion so he faced 5 years in prison and was stripped of his boxing titles. He stayed out of prison as he appealed the decision to the Supreme Court, which overturned his conviction in 1971, but he had not fought for nearly four years and lost a period of peak performance as an athlete. Ali’s actions as a conscientious objector to the Vietnam War made him an icon for the larger counterculture generation, and he was a very high-profile figure of racial pride for African Americans during the civil rights movement and throughout his career. As a Muslim, Ali was initially affiliated with Elijah Muhammad’s Nation of Islam (NOI). He later disavowed the NOI, adhering to Sunni Islam, and supporting racial integration like his former mentor Malcolm X.

Ali remains the only three-time lineal heavyweight champion. He is the only boxer to be named The Ring magazine Fighter of the Year six times, and was involved in more Ring “Fight of the Year” bouts than any other fighter. He was one of only three boxers to be named “Sportsman of the Year” by Sports Illustrated. Ali was inducted into the International Boxing Hall of Fame in its first year and held wins over seven other Hall of Fame inductees during an era that has been called the golden age of heavyweight boxing. The Associated Press ranked him as the second best boxer and best heavyweight of the 20th century. BoxRec ranks Ali as the eighteenth greatest boxer, pound for pound, of all time. His joint records of beating 21 boxers for the world heavyweight title and winning 14 unified title bouts stood for 35 years.

In 1978, three years before Ali’s permanent retirement, the Louisville Board of Aldermen in his hometown of Louisville, Kentucky, voted 6–5 to rename Walnut Street to Muhammad Ali Boulevard. This was controversial at the time, as within a week 12 of the 70 street signs were stolen. Earlier that year, a committee of the Jefferson County Public Schools (Kentucky) considered renaming Ali’s alma mater, Central High School, in his honor, but the motion failed to pass. In time, Muhammad Ali Boulevard—and Ali himself—came to be well accepted in his hometown.

Ali was named one of the 100 most influential Americans of the 20th century by Life magazine in 1990.

In 1993, the Associated Press reported that Ali was tied with Babe Ruth as the most recognized athlete, out of over 800 dead or living athletes, in America. The study found that over 97% of Americans over 12 years of age identified both Ali and Ruth. He was the recipient of the 1997 Arthur Ashe Courage Award.

Ali’s bout with Parkinson’s led to a gradual decline in his health, though he was still active into the early years of the millennium, promoting his own biopic, Ali, in 2001. That year he also contributed an on-camera segment to the America: A Tribute to Heroes benefit concert.

In February 2013, Ali’s brother Rahman Ali said Muhammad could no longer speak and could be dead within days. Ali’s daughter May May Ali responded to the rumors, stating that she had talked to him on the phone the morning of February 3 and he was fine. On December 20, 2014, Ali was hospitalized for a mild case of pneumonia. Ali was once again hospitalized on January 15, 2015, for a urinary tract infection after being found unresponsive at a guest house in Scottsdale, Arizona. He was released the next day.

Ali was hospitalized in Scottsdale, Arizona, on June 2, 2016, with a respiratory illness. Though his condition was initially described as fair, it worsened, and he died the following day at the age of 74 from septic shock.

Ali is one of the most photographed men in history. But can just a handful of photos uncover new truths about someone we think we know?