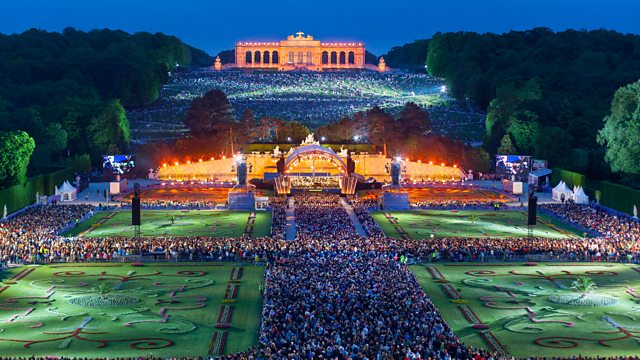 This year’s concert includes a performance by star French cellist Gautier Capuçon of Camille Saint-Säens’s First Concerto for Cello together with music by Beethoven, Lysenko, Rossini, Dvorak and Johann Strauss Jr. The orchestra podium and the audience area are located in the middle of the baroque park and are surrounded by the extraordinary scenery of Schönbrunn Palace and the Gloriette.

Nelsons studied conducting with Alexander Titov in Saint Petersburg, Russia and participated in conducting master classes with Neeme Järvi, Roberto Carnevale and Jorma Panula. He came to the attention of Mariss Jansons when he emergency-substituted with the Oslo Philharmonic in their trumpet section during an orchestra tour. Nelsons counts Jansons as a mentor and has been a conducting student with him since 2002.

In 2003, Nelsons became principal conductor of the Latvian National Opera. He concluded his tenure there after four years in 2007. In 2006, Nelsons became chief conductor of the Nordwestdeutsche Philharmonie of Herford, Germany, a post he held until the end of the 2008/09 season. His first conducting appearance at the Metropolitan Opera was in October 2009, a production of Turandot. In July 2010, Nelsons made his debut at the Bayreuth Festival, conducting a new production of Wagner’s Lohengrin at the opening performance of the festival.

Ludwig van Beethoven was a German composer and pianist. Beethoven remains one of the most admired composers in the history of Western music; his works rank amongst the most performed of the classical music repertoire and span the transition from the Classical period to the Romantic era in classical music. His career has conventionally been divided into early, middle, and late periods. His early period, during which he forged his craft, is typically considered to have lasted until 1802. From 1802 to around 1812, his middle period showed an individual development from the styles of Joseph Haydn and Wolfgang Amadeus Mozart, and is sometimes characterized as heroic. During this time, he began to grow increasingly deaf. In his late period, from 1812 to 1827, he extended his innovations in musical form and expression.

Beethoven was born in Bonn. His musical talent was obvious at an early age. He was initially harshly and intensively taught by his father Johann van Beethoven. Beethoven was later taught by the composer and conductor Christian Gottlob Neefe, under whose tutelage he published his first work, a set of keyboard variations, in 1783. He found relief from a dysfunctional home life with the family of Helene von Breuning, whose children he loved, befriended, and taught piano. At age 21, he moved to Vienna, which subsequently became his base, and studied composition with Haydn. Beethoven then gained a reputation as a virtuoso pianist, and he was soon patronized by Karl Alois, Prince Lichnowsky for compositions, which resulted in his three Opus 1 piano trios (the earliest works to which he accorded an opus number) in 1795.

His first major orchestral work, the First Symphony, premiered in 1800, and his first set of string quartets was published in 1801. Despite his hearing deteriorating during this period, he continued to conduct, premiering his Third and Fifth Symphonies in 1804 and 1808, respectively. His Violin Concerto appeared in 1806. His last piano concerto (No. 5, Op. 73, known as the Emperor), dedicated to his frequent patron Archduke Rudolf of Austria, was premiered in 1811, without Beethoven as soloist. He was almost completely deaf by 1814, and he then gave up performing and appearing in public. He described his problems with health and his unfulfilled personal life in two letters, his Heiligenstadt Testament (1802) to his brothers and his unsent love letter to an unknown “Immortal Beloved”

Gioachino Antonio Rossini was an Italian composer who gained fame for his 39 operas, although he also wrote many songs, some chamber music and piano pieces, and some sacred music. He set new standards for both comic and serious opera before retiring from large-scale composition while still in his thirties, at the height of his popularity.

Born in Pesaro to parents who were both musicians (his father a trumpeter, his mother a singer), Rossini began to compose by the age of 12 and was educated at music school in Bologna. His first opera was performed in Venice in 1810 when he was 18 years old. In 1815 he was engaged to write operas and manage theatres in Naples. In the period 1810–1823 he wrote 34 operas for the Italian stage that were performed in Venice, Milan, Ferrara, Naples and elsewhere; this productivity necessitated an almost formulaic approach for some components (such as overtures) and a certain amount of self-borrowing.

During this period he produced his most popular works, including the comic operas L’italiana in Algeri, Il barbiere di Siviglia (known in English as The Barber of Seville) and La Cenerentola, which brought to a peak the opera buffa tradition he inherited from masters such as Domenico Cimarosa and Giovanni Paisiello. He also composed opera seria works such as Otello, Tancredi and Semiramide. All of these attracted admiration for their innovation in melody, harmonic and instrumental colour, and dramatic form. In 1824 he was contracted by the Opéra in Paris, for which he produced an opera to celebrate the coronation of Charles X, Il viaggio a Reims (later cannibalised for his first opera in French, Le comte Ory), revisions of two of his Italian operas, Le siège de Corinthe and Moïse, and in 1829 his last opera, Guillaume Tell.